Firefighters Give Santa A Lift 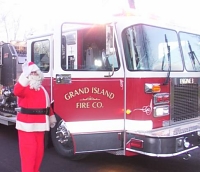 Lack of snow on Christmas Eve 2002 was all the reason Santa needed to hitch a ride around the Island with Grand Island firefighters. Children in the picture on the right were gathered at Karen and Firefighter Mike DeMartin's home on Marilyn Drive. Their children Collin Michael and Allison are shown far left and center respectively. (Click children for larger view)
Fred Claus Photos


Schimminger To Install Island Fire Officials
By Ray Pauley (GIFC Information Officer)
New York State Assemblyman Robin Schimminger will install newly elected 2003 Grand Island Fire Company officers at Fire Headquarters on January 11, 2003, according to Greg Butcher who will take over the chief's postion.
He characterized Schimminger as a "steadfast" supporter of the volunteer fire service, who recently assisted the GIFC in retaining EMT/Paramedic recertification as a core provider. As a result, Wayne Osten, Director of the N.Y.S. Dept. of Health - Office of Health Systems Management, concluded that the GIFC "has the requisite skills and credentials" to assure high quality instruction in the core curricula. GIFC's existing program will therefore translate into the best services possible for N. Y. residents requiring emergency care.
Chief elect Butcher further states that EMS services will continue to be given "top priority" by the trained professionals who dedicate themselves to community protection on a 24-7 basis.


Emergency Response To Terrorism:
A Realistic Challenge For Firefighters
By Ray Pauley (GIFC Information Officer)
During a December 16, 2002 training seminar at Grand Island Headquarters, Steve Stouter, Project Coordinator for Buffalo's Metropolitan Medical Response System, advised Firefighters that they will be an integral part of "the first line of defense," in the event of a local terrorist attack.
All first responders must be prepared for mass casualties, that would be expected after a biological, nuclear, incendiary, chemical, or explosive event, he stressed. Firefighters, paramedics, law enforcement officers, ambulance personnel, etc., must all be acutely aware of attendant risks to their own health and safety, he added. Universal precautions and/or more stringent measures must be adherred to, so that emergency workers do not become unwitting victims themselves, therby further complicating the existing problem.