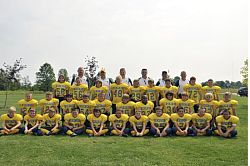 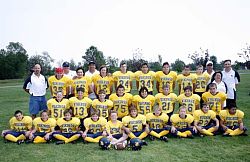 Click photo for larger view
135 lb. Jr. Vikings
The 135 lb. Jr. Vikings finished a perfect season 12-0 with a 26-20 win over the TFC Redskins Saturday, November 1 at Wilson High School, to win the NYFL 135 LB. Super Bowl. This is the 1st undefeated season in many years for the Jr. Vikings organization. The team was led by the outstanding running of Ron Stephens with 218 yards rushing and scoring all 4 TDs. The offense under the guidance of QB Joey Chiravelle, took the ball over from the TFC club with less than 2 minutes to play and needing 40 yards to score the game winning drive which was scored by Stephans with 20 seconds left in the game. A 2-point pass conversion from Chiravelle to tight end TJ Acker secured the win for the Vikings. The defense was led by the play of Joe Gioeli, TJ Acker, Matt Sutton and Cody McConnell.
For the season, Stephans rushed for over 1400 yards and scored 23 TDs. The 135 lb. Coaching Staff (Head Coach Ken Genova, Assistants Mike Mosher, Joe Gioeli, Joe McConnel and Greg Grenda) would like to thank the players, parents and especially the cheerleaders for all their help in making this the PERFECT season. 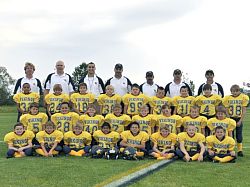 
Grand Island Junior Vikings - Week Six Results - Sunday, Oct. 12, 2008
85 lb. Junior Vikings
Junior Vikings 31 - New Will Ran 15
The game was a battle of will as it was a back and forth in the first half, and then the Jr Vikings defense stymied New Will Ran in the second half. Devin Brandon scored on two long touchdown runs for the Vikings while doing a great job quarterbacking the team. Thomas Cecere also added two long touchdowns and Dominic Pavone scored on a reverse. The offensive line, Nick Anzalone, Kenny Yockey, Parker Morrow, Adam Crist, Ryan Schwinn, Eric Beauchamp and Justin Jarka has done a phenomenal job all year. Fullback Mason Akers added a number of bone jarring blocks to break a lot of the long runs while adding some tough yards up the middle. The entire defensive played outstanding all year only giving up 33 points for the season.
105 lb. Junior Vikings
Vikings 18 - New Will Ran 0.
The entire team played great!!
135 lb. Junior Vikings
Junior Vikings 28 - New Will Ran 0
A solid performance from all!

Grand Island Junior Vikings - Week One Results - 2008
85 lb. Junior Vikings
Junior Vikings 27 - Renegades 0
Thomas Cecere had a great day running the football as he scored two rushing touchdowns before sustaining a game ending ankle injury in the third quarter. Nick Anzalone scored one rushing touchdown and also scored a defensive touchdown when he recovered a fumble on the last play of the game. Offensive stars for the week are Thomas Cecere, Nick Anzalone, Devin Brandon and Mason Akers. On the defensive side the Junior Vikings held their opponent to just two first downs while making some huge tackles for losses. Defensive stars for the week are Justin Jarka, Ryan Schwinn, Adam Patterson and Nick Anzalone.