Buffalo Launch Club:
Boater Safety Course At BLC - April 2009
Buffalo Launch Club members will host a Boater Safety Course to be presented by the U.S. Coast Guard Auxiliary from 8 a.m. to 5 p.m. Saturday, April 25. This class meets the 8-hour New York State Requirement for the Safe Boater Operating Certificate for personal watercraft operation for all ages, and boat operation for those under age 18.
The course is open to the general public:
• $40 for first person in household, $20 for each additional
• Fee payable to the Coast Guard Auxiliary
• Food and beverages will be available for purchase from the Club
• Call Helen, 773-7629, to reserve a spot
• Course being held at Buffalo Launch Club, 503 East River Road, Grand Island. NY 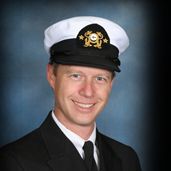 Commodore Doug Scheid
The Board of Directors of the Buffalo Launch Club has elected Grand Island resident Douglas M. Scheid to serve as their Commodore for 2009. Mr. Scheid follows another Island resident, John Bruno, who has served as Commodore for 2008. Mr. Scheid, who owns and operates a Buffalo area architectural firm, will preside over the club's social and business affairs with his first mate Patty and the club's board starting immediately following the installation of officers planned for December 28th at the East River Road clubhouse. Also serving with Mr. Scheid in 2009 will be Vice Commodore Rick Beck, Rear Commodore Thomas Grady, Fleet Captain Kenneth Bambach, Secretary Michael P. Dallessandro and Treasurer David Grady. Also serving the club as members of the Board of Directors for 2009 are Thomas Stewart, Frank DeGeorge, Anthony Parlato, Norbert Zintek, Andrew J. "AJ" Beyer IV and Andy Barbasch.
For information about club membership or to schedule an informal tour of BLC facilities, call the club office at 773-7629 or visit the club's website at www.Buffalolaunchclub.com 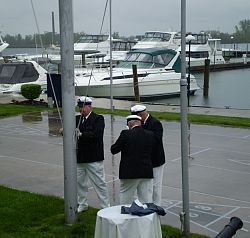 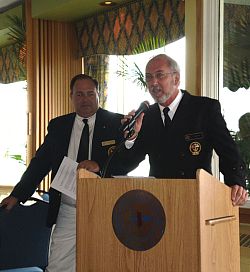 BLC Director Michael Dallessandro with Past Commodore James Baker at podium
Click photos for larger view
Under clouds and rain Commodore John Bruno and Fleet Captain Thomas Grady declared the 105th boating season open at the Buffalo Launch Club on Sunday May 18, 2008. A large crowd of BLC officers, directors, members, spouses, families and guests braved the cold temperatures and weather that didn't feel like spring at all, to participate in this year's ceremony which was followed by a champagne brunch.
Along with the traditional cannon blasts and and the raising of various flags, a wreath was launched while bagpipers played Amazing Grace in honor of BLC members Don Murphy, James Coad and Larry Harpster who passed away this year. BLC Board member Michael Dallessandro had the honor of presenting Past Commodores James Baker and David Wright with their life membership which commemorates their meritorious service to the club. Mr. Dallessandro also presented the Harry Simpson Memorial Scholarship to BLC employee Kellie Shanahan, who is pursuing a degree in education at Buffalo State, and to Alysson McMahon who will attend Buffalo State where she will earn a degree in Business. 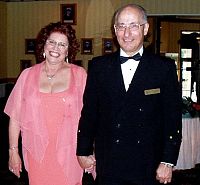 Commodore Bruno receives his Commodore's plaque from Immediate Past Commodore William Reitebach
Click photos for larger view
Nearly 250 members and guests filled the Buffalo Launch Club to capacity on Saturday, May 10, 2008 to honor their 2008 Commodore, John Bruno and his wife Carol. The Brunos have given a tremendous amount of time to the success of the BLC and it was evident by the turnout for this black tie gala that the members truly value their contribution. Commodore Bruno has served the BLC as a board member or officer for 11 years. During that time he served as Treasurer and is credited with developing the sound financial plans that have the BLC on sound footing today. He also served as Fleet Captain for 2005, Rear Commodore for 2006, Vice Commodore for 2007 and Commodore for 2008. His first mate, Carol, has served as president of the BLC Mates organization and is credited with chairing a number of successful events for the spouses of members.
During the evening guests enjoyed delicious hot appetizers and a dinner of surf and turf followed by the "perfect peach" dessert. Members and family paid tribute to the Commodore with both serious and humorous stories of his boating years and the evening was capped off with dancing to the music of the Live Wire Band. 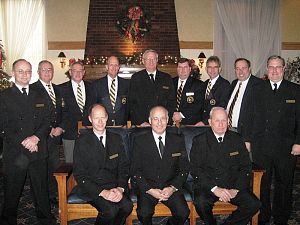 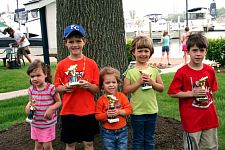 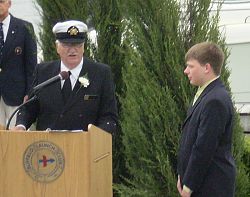 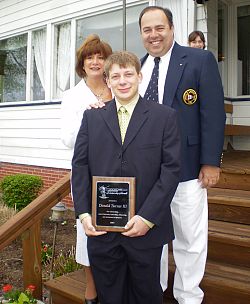 Harry Simpson Scholarship winner, Donald Turner.
(left) BLC Past Commodore Robert Black present scholarship award to Donald Turner; (right) Donald is shown with his parents, Karen and Michael Dallessandro.
Click photos for larger view
It was an overcast day for the Buffalo Launch Club's annual flag raising on Sunday, May 20, 2007 when the Harry Simpson Scholarship awards were presented to Donald Turner III and Gabrielle Montemage. The presentation was made by Past Commodore Robert S. Black.
Donald, who will graduate in June with the Grand Island High School Class of 2007, will be attending Buffalo State College in the Fall of 2007. He is the son of Island residents Karen and Michael Dallessandro.
Gabrielle, a server at the BLC and a member of the Grand Island High School Class of 2003, recently graduated from Niagara University with a communications degree.
The scholarships, established in 1990, are given in memory of Harry Simpson, who served as the Buffalo Launch Club's manager for 42 years. 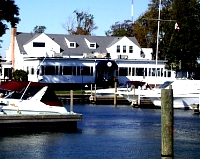 The 17th annual Boater's Seminar and Luncheon sponsored by the Buffalo Launch Club, will be held on Saturday, April 14, 2007 in the clubhouse, 503 East River Road, Grand Island, NY. Registration for the morning of boating education, maritime history, and adventure begins at 9:30 a.m. with a program from 10 a.m. to noon and lunch from noon to 1 p.m. For reservations ($18 includes lunch, tax & gratuity) call 716-773-7629. The seminar is open to all boating friends. See "BLC Boater's Seminar/Luncheon for further information.

A Boating Event sponsored by the Niagara Frontier Antique & Classic Boats will take place at 6 p.m. on Saturday, March 31, 2007 at the Buffalo Launch Club, 503 East River Road, Grand Island, New York. The public is invited.
The George Reis Story
George Reis (1917-1962) was the owner/driver of "El Lagarto" Gold Cup champion 1933, 1934 and 1935. Not for 30 years would another craft (Miss Bardahl) match El Lagarto's record of winning 3 Gold Cups in a row. The fastest boat in the world at that time, achieving a record speed of 72 mph. Pictured in the following link is the El Lagarto driven by Buffalo Launch Club member Ed Grimm.
Guest Speaker: Bill Morgan
Just a boy when El Lagarto was being campaigned, often seeing her on Lake George, Bill will talk on the accomplishments of George Reis. Bill created a full-size replica of the El Lagarto that he calls "Happy Times."
Cost for the evening: $20 per person
This will include hors d'oeuvres, beef and turkey carving stations, as well as a chocolate fountain dessert selection. Food will be served informally at stations to give the opportunity to view Bill's photo collection.
6 p.m. - Food and drinks served, cash bar available
7:30 p.m. - The George Reis Story - presentation by Bill Morgan
Reservations (check payable to NFC/ACBS) and more info:
Mail to: Jennifer Frederick-Kelly, 109 June Dr., Elma, NY 14059
E-mail: fredmach@choiceonemail.com
More info: Rich DeGlopper, 716-876-7390 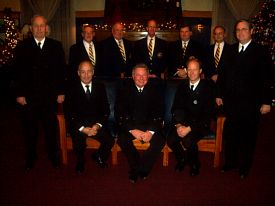 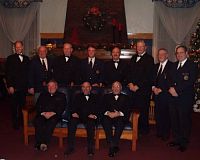 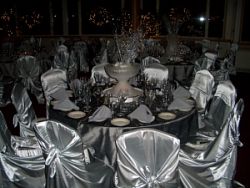 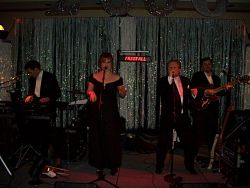