Mission Statement
To provide boys in grades 1-5 a safe, fun way to learn many life skills.
Events
Pack Meetings held once a month at Huth Rd. School
Den Meetings held 1 - 2 times a month - to be determined by the Den Leader
Help
We could always use adults who would be willing to share his/her time and hobby or skills. Our Cub Scouts earn acheivements in many different areas and skill levels. Any help would be greatly appreciated!
Strengths
We provide the boys in grades 1 - 5 a great opportunity to have fun, while learning many new things he may not learn elsewhere. They learn responsibility, teamwork and many skills that will assist them later in life. We also have many great parents who help keep our Pack running. 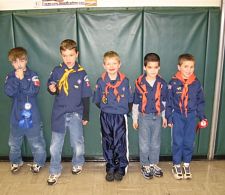 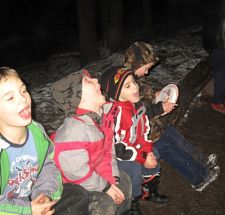 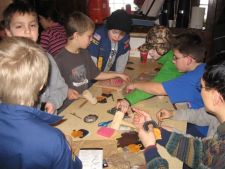 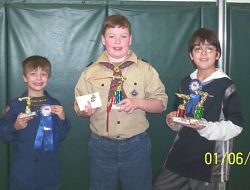 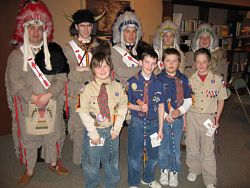 (left rear) Boy Scouts Ben Rossiter, Sean McDermott, Joe Fusco, III, Travis Zukic, and Casey Dahlstrom
(front left) Cubs Casey Bolles, James Rustowicz, Adam Heftka, and Jonathan Boorady
Click photo for larger view
Cub Scout Pack 510's Blue and Gold Dinner was held Friday, March 3, 2006 at Trinity UM Church on Whitehaven Road. Catering was done by John Matwijkow and NCCC. A group of boys from the Order of the Arrow Ceremony Team performed the Order of the Arrow for the four Cub Scouts who are moving on to Boy Scouts. This Arrow Ceremony Team will enter a competition with other ceremonial teams in the spring. A special thanks from Cub Pack Leader Kevin Rustowicz to Brian Mongielo, Polaris District Order of the Arrow advisor, and the Boys Scouts, all Eagle Scouts or Life Scouts, who helped out with a wonderful ceremony for the boys. 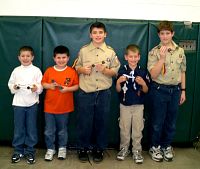 Three Grand Island Cub Scout Packs got together, courtesy of St. Stephen School, for the first Grand Island Pinewood Derby Run-off on Saturday, January 10, 2004.
Each Pack (Pack 510 meets at Huth Road School, Pack 254/Kaegebein School and Pack 630/St. Stephen School) held its own pinewood derby in the school cafeteria. To begin with, each cub scout receives a block of wood, four tires and nails for axles and has a month to transform these materials into a racer. Each year the cub scouts amaze the leaders and parents with their creativity. This year's cars included a hummer, complete with "army guys" inside, a snow covered mountain complete with snowboarders coming "down the mountain," and an inch worm carved out of the block. The race takes place on a 26-foot track with timing to 1/1000th of a second.
The official winners for Grand Island this year are:
Fun was had by all and John Siegel and his Race Committee wish to congratulate all the Cub Scouts for all the hard work they put into their creations. "We expect even more fun next year when Pack 425 (meets at St. Martin's Church) joins in the fun."

Cub Scouts from Grand Island's Pack 510 played a key role in the Buffalo Bison's June 22, 2003 game against the Charlotte Knights. A color guard from the Pack had the honors of carrying the American and Pack's flags for the national anthem before the start of the game. Cub Master Dan Skelly lead flag bearers Adam Heftka and Mark Lydle along with color guard members Eric Dudley, Nicholas Paolini, Ryan Burow, Max Grenda, Jonathan Grenda, Ryan Arsenault, Isaiah Brown and Mitchell LaRiviriere.