Boy Scout Troop 510 To Hold Open House - March 2006
Boy Scouts from Troops 510 will hold an Open House for all boys in the 5th grade or older. The Open House will be held at 7:15 p.m. March 8, 2006 at Old Historic Trinity, 2100 Whitehaven Road. Come find out what scouts is all about! The event will feature a slide show, gym activities, refreshments and parent presentation. Siblings are welcome. For more information call Nancy Bolles, 774-1292. 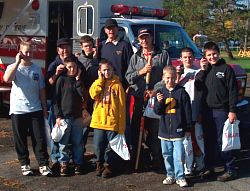 Shown are members and leaders of Scout Troop #510: (front left) Sean Garten, Connor Boles, Jonathan Glenda; (back) Casey Dahlstrom, Pat Garten, Charlie LaVallee, Dan Skelly, Gary Dahlstrom, Glenn Skelly, Aaron D'Angelo
Click photo for larger view
Members of Boy Scout Troop 510 and their leaders participated in the huge disaster preparedness drill October 15, 2005 at Evangola State Park. A simulated anthrax outbreak was the focus of the drill where 24 agencies participated in the screening of victims for radiation exposure, and checking on the medical condition of 500 scouts/leaders from WNY.
The staging of the full-scale disaster drill with Emergency Preparedness Responders included the following participants: the Department of Homeland Security, Erie County Department of Emergency Services, Erie County HazMat Organization, The Specialized Medical Assistance Response or SMART Team, local hospitals, first responders and the Greater Buffalo Chapter of the American Red Cross.
All agencies appreciated the scout participation and the scouts themselves enjoyed the experience. As a thank you to the scouts, the various agencies packaged up give-aways that included flashlights, lip balm, fridge magnets, and rubber cell phones (see photo). A display of many exhibits followed the drill.

Casey Dahlstrom (left) and Ron Warner Jr. in front of 3729 pounds of food collected for the Food Bank
For his Boy Scout Eagle Scout requirement, Ron Warner Jr. organized a food drive at two Grand Island schools. During the week of November 15-19, 2004, students and faculty at Huth Road Elementary School and Kaegebein Elementary School contributed a total of 3729 pounds of food and 704 winter coats to benefit the needy. The employees at the Food Bank of Western New York who picked up the food and coats from the Warner house were amazed; they had never picked up so much from one place. They stated that the schools had done better than most big corporations do when they do holiday food drives amongst their employees. In each school the class that generated the most weight in food was to receive a pizza party. The Brick Oven Pizzeria and Pizza Hut have agreed to help with supplying pizza. The winning classes were Ms. Diliberto’s class at Huth Road who collected 194 pounds of food and 22 coats, and Mrs. Leifer-Lavitz’s class at Kaegebein who collected 285 pounds of food and 18 coats.
The Food Bank of Western New York distributes food and grocery items to over 500 agencies in the counties of Cattaraugus, Chautauqua, Erie and Niagara. According to Food Bank Director Clem Eckert, the 3729 pounds the schools raised can feed 355 families for a day.
Ron Warner Jr. is a member of Boy Scouts of America Troop 510, which meets at Trinity Church. As a candidate for his Eagle Scout rank, Ron was required to do a project to help his community, and wanted to help the 91,000 hungry Western New Yorkers who turn to soup kitchens, food pantries, and other emergency food providers.

Eagle Scout Casey Dahlstrom with proud parents Gary and Emily Dahlstrom
Newest Eagle Scout Casey Dahlstrom, a junior at Grand Island High School and member of Troop 510, has completed the requirements for Boys Scouts of America's highest ranking - Eagle Scout. In a ceremony attended by Councilman Dick Crawford, family, friends and other scouts at Trinity United Methodist Church on Saturday night November 27, 2004, Casey received his rank insignia, certificate, and other Eagle Rank items. To achieve this rank that only 5% of scouts attain, Casey needed to earn 21 merit badges and complete a project to benefit the community.
Casey's Eagle project involved revitalizing the nature trail at the Nike Base on Grand Island. This involved clearing parts of the trail that were overgrown, building benches to rest, marking the trail with trail markers and mileage markers, making an entrance sign, and creating a trail brochure.


Eagle Scout Candidate Organizes Food, Coat Drive To Benefit The Needy - 2004
Ron Warner Jr. is organizing a five-day food and winter coat drive in Huth Road Elementary School and William Kaegebein Elementary School. The class in each school that generates the most weight in food will receive a pizza party. Coats brought in will count as a one-pound credit towards that class’s total food weight.
The drive is scheduled from Monday, November 15, 2004 through Friday, November 19th. Students are encouraged to bring in non-perishable food items and winter coats.
What group will benefit from the project? Answer: Over 500 agencies in the counties of Cattaraugus, Chautauqua, Erie and Niagara that the Food Bank of Western New York distributes food and grocery items to.
Ron Warner Jr. is a member of Boy Scouts of America Troop 510, which meets at Trinity UM Church. As a candidate for his Eagle Scout rank, Ron must do a project to help his community. Ron wants to help the 91,000 hungry Western New Yorkers who turn to soup kitchens, food pantries, and other emergency food providers. 40% of these are children.

Leaders and members of Boy Scout Troop 510 held their Court of Honor/dinner on Sunday, February 8, 2004 in Trinity UM Church. The scouts received several merit badge and rank advancements. Rev. Paul Robinson received an official neckerchief and custom neckerchief slide. Earlier that morning, during his sermon at Trinity Church, Rev. Robinson reflected on some good times when he was a scout.
Ron Warner, the evening's MC, received his Life Rank and the Chairman's Choice Award for Outstanding Personal Leadership. Casey Dahlstrom received the troop’s annual Scout-of-the-Year award. Josh Shilling was a good sport when he received a fun award called the Brickhead Award for accidentally getting hit by a brick while performing community service.

All Island Camporee Held At Nike Base - 2003

Click photos for larger view
Boy Scout troops 254 and 510 of Grand Island held their first all Island Camporee from November 7-9, 2003. The scouts and their leaders spent the weekend camped out at the Nike Base, where they participated in First Aid, Orienteering, and Campfire building competitions, as well as an open air viewing of the lunar eclipse. The Camporee was a great success and is planned to be an annual event for Island Scouts.

James Frantz III, 18, has fulfilled all the requirements for Eagle Scout and will be recognized at the Eagle Ceremony at 4 p.m. June 1, 2002 in Trinity United Methodist Church. A senior at Grand Island High School and a member of Boy Scout Troop 510, he is the son of James and Kathleen Frantz of Continental Lane.
As an Eagle project, James chose a goal of creating Nature Identification Signs along a Nature Path at Riverside Salem Church Park on West River Road, Grand Island NY. Activities involved coordinating volunteers and a nature specialist to identify plant and animal wildlife along an existing nature path. The next step was to conduct research and the manufacture of signs for each species, including species, descriptions and pictures. The final step was to install the signs along path. The project was conducted in the fall of 2001.


If you are a member of this organization, we need your help. GIECOM.Net has partnered with the Connections program to help Grand Island as a community "Get it Together." Please visit our website G-I-Together.ORG and fill out our SURVEY. Every group on Grand Island will have its own FREE web page showing: meeting times and location, contact persons, your Mission Statement and a listing of events. We will also be linking your news events that appear in the local media and on IsledeGrande.Com, Grand Island's E-News Source, to your page, maintaining an archived journal of pictures and news. This is the perfect opportunity for your group to connect with potential new members and the community.