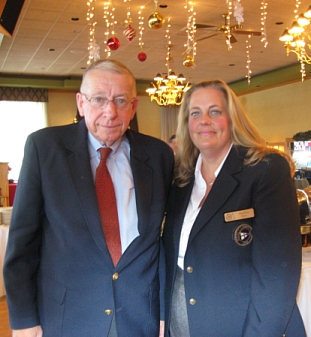 Past Commodore Richard Sander and daughter, Teresa Hooper, newest member of the Club's Board of Directors

Buffalo Launch Club members held their annual installation of officers at the BLC on Sunday, December 29, 2010. Tom Grady of Williamsville will serve as commodore for the year 2011. And for the first time in Buffalo Launch Club history, a woman has been elected to serve on its board of directors. Island resident, Teresa Hooper, who is the newest member of the Klocke/Sanders clan to take a BLC office, joined the BLC in 2001 and immediately began serving on various committees and organizing many social events.
The Buffalo Launch Club has been a family affair for the former Teresa Sander, beginning with her grandfather, Joseph Sander, who joined the BLC in 1952 followed by her grandfather, Past Commodore Franklin Klocke, who served the Launch Club in the 1950s and 60s. Teresa's father and mother Richard and Gale Klocke Sander, grew up around the club as children, as did Teresa and her brother and sisters. Her father served as commodore in 2000 and remains an active member. And now Teresa and Mike Hooper's young son, Luke, spends time at the BLC as often as he can.
The Buffalo Launch Club was organized in 1903 and moved its off-Island operations into a new clubhouse on East River Road, Grand Island, NY in 1906. A fire on the eve of the club's 25th anniversary party completely destroyed the clubhouse putting the BLC out of commission for the boating season in 1931. Completion of a brand new building, the present clubhouse, was opened in the spring of 1932.