This page is for the purpose of posting news and addresses of Island
residents who are serving our country in the military.
To add news and photos to this new page, email to jodi@giecom.net
or drop off at the Isledegrande.com office, 1871 Whitehaven Road (between Hairitage Hair Salon and DeSignet Jewelry)

Navy Seaman Apprentice Timothy A. Sutton, son of Ronald J. and Lauren Sutton of Grand Island, N.Y., recently completed U.S. Navy basic training at Recruit Training Command, Great Lakes, Ill. and was recently promoted to his current rank upon graduation.
Sutton received the early promotion for outstanding performance during all phases of the training cycle. Training which included classroom study and practical instruction on naval customs, first aid, firefighting, water safety and survival, and shipboard and aircraft safety. An emphasis was also placed on physical fitness. The capstone event of boot camp is "Battle Stations". This exercise gives recruits the skills and confidence they need to succeed in the fleet. "Battle Stations" is designed to galvanize the basic warrior attributes of sacrifice, dedication, teamwork and endurance in each recruit through the practical application of basic Navy skills and the core values of Honor, Courage and Commitment. Its distinctly "Navy" flavor was designed to take into account what it means to be a Sailor. Sutton is a 2014 graduate of Grand Island Senior High School of Grand Island, N.Y. 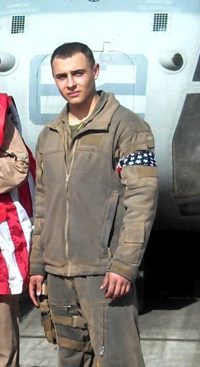 After being deployed to Afghanistan for 7 months, Cpl Thomas Shanor returned to his duty station in Miramar, California. While on this deployment, Tommy had numerous awards and recognitions from his accomplishments. The first was his promotion to Corporal. This promotion is a big step into his career since he is a Non-Commissioned Officer. Some of his other recognitions are TGQ (tail gunner qualified), plane captain and 6 air medals. As you can tell, Tommy had a very successful deployment and we are all thankful that he returned safely from a stressful and intense war zone. We thank him for his service and dedication while fighting for our rights and freedoms.