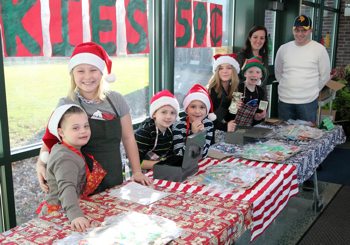 The third graders in Mrs. Diane Lipp's class at Huth Road school participated in the 11th annual cookie sale this week. Last week, they frosted and decorated over 2,000 cookies that were made by teachers, parents, and the 8th graders in Mrs. Fonte's Home and Careers class at the middle school. This week, they sold the cookies to the students and staff at Huth Road. All the money raised will go the the Huth Road Community playground and the Cystic Fibrosis Foundation/Making Strides. Any community member that would like to make a donation to either or both of these causes can send a check to Mrs. Lipp, Huth Road School, 1773 Huth Road. The third graders had a great time at the cookie sale! 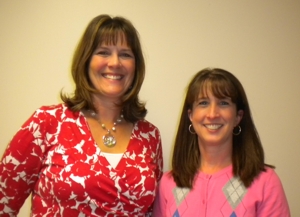 Huth Road PTA presented Honorary Life Membership awards to Carolyn Thompson and Tracey Shickluna at a recent PTA meeting. Honorary Life memberships are presented to individuals who have demonstrated outstanding effort on behalf of the welfare of children and youth. Carolyn Thompson was recognized for her work as an "honorary" member of Huth Road Elementary staff for years. She is the most requested substitute the school has had because of her attention to detail, flexibility in meeting the needs of the students and teachers, and her kind and compassionate yet commanding rapport with students. She has volunteered as a member of the Shared Decision Making Team for more than four years, co-chairing for the last two. As a team member she was instrumental in creating and implementing the "Huth Bowl," a pint-sized version of the high school corporate bowl for the Huth Bazaar. Last year she spearheaded the creation of "Parent Support Videos" in response to the staff's request to improve teacher-parent communication and support for student learning. Carolyn's unassuming nature, bright mind, and tireless energy are dwarfed only by her sharp focus on students and her unending positive attitude.
Tracey Shickluna has worked tirelessly on theHuth Road Enrichment committee for years, meeting in the early morning for the teamwork and making numerous phone calls to set up programs and assemblies. Her work has brought many events to the school that have supplemented the curriculum and brought joy to students. After being the parent chair she stayed on as a parent representative, bringing to every meeting a warm, caring heart that put teachers and students in the forefront. She was always willing to make calls and arrangements for programs so teachers could focus on their classrooms. She demonstrated an understanding of the demands of a teacher day and worked to assist in any way possible. Tracey also served in a leadership role with the book fair, which helped make it a success. She also volunteered for the report card committee, where she provided a much needed "parent perspective" to the teachers on the committee. She is both sharp in thought and kind in demeanor, which make her an asset to any team. If it's for kids, Tracey is the first to get involved. 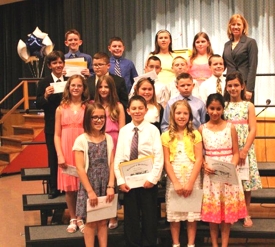 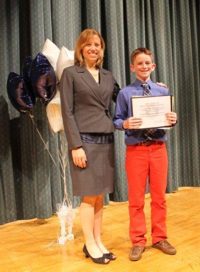 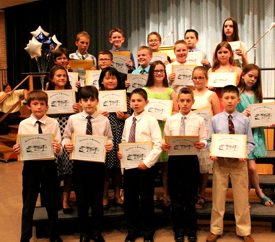 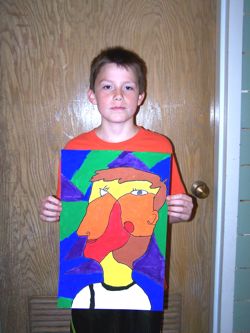 The Grand Island Art Department proudly announces Kristian Krantz as the K-12 Artist of the Month. Kristian is a member of the 5th Grade Art Club at Huth Road Elementary. He became interested in art during kindergarten. Kristians greatest influence is his older brother. He remembers watching, and admiring, the things his brother drew while growing up. Kristian takes pride in his work and uses only his best craftsmanship. He prefers to work two-dimensionally in pencil and likes to draw in his free time. You will often see his favorite color, orange, incorporated in his work. Kristian would like to continue drawing and creating art and plans to join art club in the middle school. Congratulations! 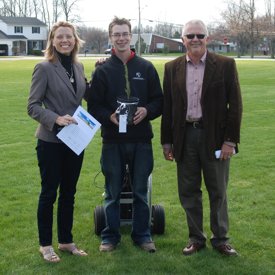 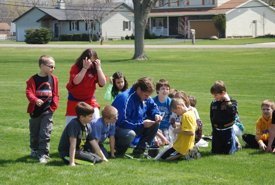 The 4th grade classes at Huth Road Elementary held an Arbor Day Program on Friday, April 26th on the front meadow lawn. Principal Kerri Nowak welcomed the students and special guests Bob Piatek of State Farm Insurance and Matt Smith of Serene Gardens Landscaping. The fourth graders were part of the "Fourth Grade Foresters" program sponsored by Bob Piatek and received an individually packaged 12 to 18 evergreen tree seedling to take home. Matt Smith talked of the importance of Arbor Day and the many special benefits of planting trees. Each class planted a seedling in a container that will live in the courtyard of the school for the next year. Next Spring, the students will plant the trees in a newly designed landscape project that Serene Gardens and Matt Smith are working on. Be on the lookout for news of the landscaping project. Volunteers and donations will be appreciated when the time comes. 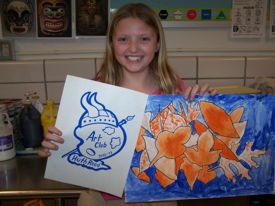 Congratulations to Eve DiCarlo who proudly has earned the title of the K-12 "Artist of the Month". Eve is a fifth grader at Huth Road Elementary and has always found a way to show her creativity in her art. Eve is never afraid to add her own personal expression to her work. She is always drawing in her spare time and is excited to show off her latest doodles or drawings for Mrs. Allen to hang. She mentioned that her art teacher, Mrs. Allen, has been an inspiration to her and she realized how much she enjoys art because it is "so much fun at Huth". Eve also had the honor of her logo design chosen for this year's art club t-shirt design. She enjoys claymation and is particularly fond of "Gumby". Her favorite colors are blue and green. Eve enjoys the short, quick brushstrokes in the paintings of Vincent VanGogh. The art department wishes Eve continued success and encourages her to express her creativity.