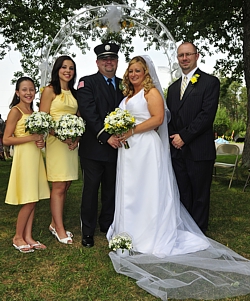 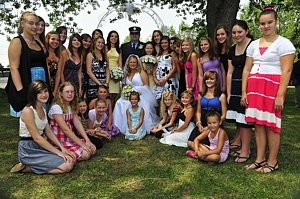 Wedding Party - (right) Islettes' Elite members
Click photos for larger view
The Islettes' Elite Majorettes and Mr. and Mrs. Fred Mumm of Grand Island, are pleased to announce the marriage of their director and daughter, Heidi Sue to Scott David McCormick, son of Mr. and Mrs. Kevin McCormick of Orchard Park. The wedding was held at the LaSalle Sportsmen's Club in Niagara Falls, NY on Saturday, August 14, 2010. A daisy theme family picnic for 300+ guests from as far away as Florida, California and Australia followed and the wedding included a bounce house, games, and water balloons. Reverend Jeffrey B. Childs of Trinity United Methodist Church officiated the nuptials. Brian McCormick, brother of the groom, served as best man. Rebecca Sobol, Islettes' Elite Coach, was the Maid of Honor, while Heather Murray, Islettes' Elite team member, was the Junior Bridesmaid. Breanna Cupido, God-daughter of the groom served as the Flower Girl. Scriptures were shared by family and friends: Shelbi Milkas, Karen Foote and Sue Radder. Greeters were Islettes' Elite members, Molly and Bethany Wynne along with the groom's nephew, Alex McCormick.
The bride is a teacher, coach and theatre director at St. John Lutheran School in Niagara Wheatfield, and baton instructor at Adell's School of Dance as well as the director of the State, Regional and National Champion Twirling Team, Islettes' Elite Majorettes. The groom is a manager at 84 Lumber and a member of the Grand Island Fire Company.
Mr. Scott and Miss Heidi Sue plan to honeymoon at Disney World in 2012 when the Islettes' Elite perform in the Disney Showcase. The couple resides on Grand Island with their two dogs, Biscuit and Sadie.

Islander JennaBeth Stockman (GIHS 2005) will be dancing in the Orange Bowl half-time show with the Goo Goo Dolls. The Orange Bowl, featuring Virginia Tech vs. Stanford, is scheduled for Monday, January 3, 2011 at 8:00 p.m. on ESPN. JennaBeth along with many other dancers, start rehearsing Friday, Dec. 31st in Miami, FL. 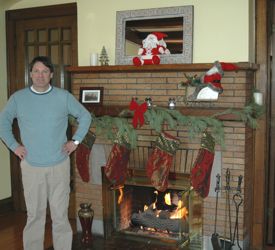 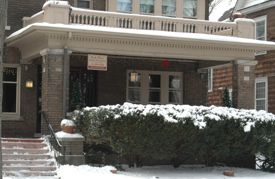 Left: Mark Savoy in living area. Right: Front of B & B.
Click photos for larger view
Island resident Mark Savoy graduated from Grand Island High School in 1980 and then went on to graduate from Buffalo State College. Soon after, he left the area for California, where he spent the next 27 years working in industrial sales and telecommunications, getting married and raising two children. In 2008 Mark, wife Beverly, son Jonathan and daughter Kaylynn returned to Grand Island where many of Mark's siblings and Dad live. In October of this year, Mark and Beverly purchased the Park Place Bed & Breakfast in the Park Place Historic District of Niagara Falls. The residence was built in 1913 and was the original home of James G. Marshall, the founder of Union Carbide. It is listed on the New York State and National Registers of Historic Places and has four guest rooms with attached baths. The dining room seats 14 and has the original table and chairs and there is wonderful, craftsman woodwork throughout. Mark came back for family and for what he considers great weather with lots of activities, namely boating/swimming in the summer and skiing/snowboarding in the winter. If you have guests coming in to visit or just need a change of pace, visit www.parkplacebb.com for a step back in time. 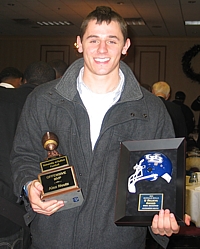 Click photo for larger view
Alex Neutz, a red-shirt receiver for the University at Buffalo, was recognized along with 21 student athletes for earning an overall GPA of 3.0 or better at the UB Football Senior Recognition & Awards Banquet held at the Millennium Hotel on December 12. Alex, a management major, has a 3.4 GPA.
Of the Wide Receivers, Alex received the U Believe Award, and was named Offensive MVP for 2010.

Katie Oursler, upon hearing that the Buffalo City Mission was in need 4000 boxes of stuffing mix to go with Thanksgiving dinners they provide for the less fortunate, set out to collect the boxes from friends and family here on the Island. The final count is 2500 boxes and monetary donations totaled $1900 would surely allow her to turn the cash into stuffing mix! Katie deserves a great deal of praise for her efforts, and appreciates the community businesses, churches and residents who supported her good deed.