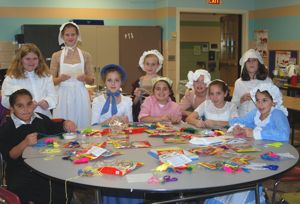 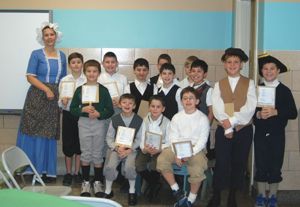 Mrs. Katherine Chadwicks 4th grade at Kaegebein Elementary celebrated Colonial Day on Tuesday, November 26th. This day is based on a class novel the students read called "Felicity Learns a Lesson". The girls prepare the dinner meal. They make applesauce, butter, peel and mash potatoes, and prepare the stuffing. The boys learn lessons from hornbooks. The girls learn how to cross stitch and have a tea party. The boys learn about Colonial occupations and construct a sign to go with an occupation they are interested in. Both the boys and girls make soap, carve soap, write with a quill feather and ink, and stencil. This year Mr. Rizzuto, an Old Fort Niagara re-enactor, taught the students Colonial games. All the boys and the girls enjoyed this authentic experience with Colonial times. 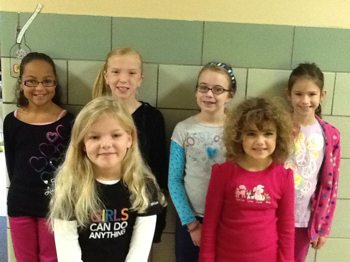 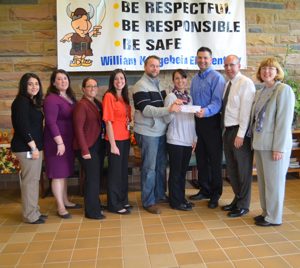 Say Cheese Pizza owner Kevin Slachciak presented a check for $750 to the Kaegebein playground committee and teachers on Wednesday, October 23rd. The money was raised at the Say Cheese Golf Tournament and will be used to build a new school and community playground. A pajamas and popcorn movie night is planned for Friday, November 15th and the 2nd Annual Dinner and Talent Show will be on Friday, December 6th. 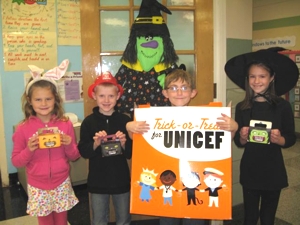 By Lee Tetkowski...Do you believe all children everywhere have a right to be healthy? Look for those UNICEF cartons on Halloween and help make them heavy and jingling. Almost 1/3 of the children in developing countries are malnourished. For 45 cents you can provide a package of nutritious peanut paste loaded with vitamins and minerals for one of them! $10.00 can provide 294 packets. Those colorful little UNICEF cartons are being distributed throughout the schools to all the children who accept them. Teachers have been stressing UNICEF's focus this year on the importance of nutrition. UNICEF helps educate families about best ways to feed and care for babies. Helping provide wells with safe drinking water goes on! This is a special tradition for kids to be able to help other kids while they enjoy the fun of Halloween Trick-or-Treating.
Checks made out to U. S. Fund for UNICEF and mailed to Chair, Lee Tetkowski, 1530 Whitehaven Rd. will be eagerly added to the coins the kids turn in. Let's be generous and help reduce severe acute malnutrition in developing countries. The letters stand for United Nations International Children's Emergency Fund. 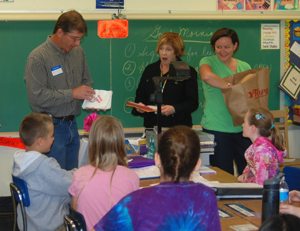 It is a tradition at Kaegebein Elementary School to commemorate Johnny Appleseed's birthday (September 26, 1774 or 1775) with an apple and a story about him. Johnny's actual name was John Chapman and he was born in Leominster, Massachusetts. During the early 1800's Johnny traveled westward planting apple seeds he had collected from cider presses in Pennsylvania. Much of what is known about Johnny Appleseed is mixed with legend. Johnny Appleseed is celebrated in frontier legends as a symbol of westward-moving civilization. Each class was read a story about Johnny Appleseed and then a delicious apple was given to each student. Mrs. Susan Skrabacz's 5th grade class had parent volunteers Jean Pecoraro and Jim Linenfelser helping in the classroom. The program is sponsored annually by the Kaegebein Elementary School PTA and received a generous donation from Top's Market to help purchase apples. 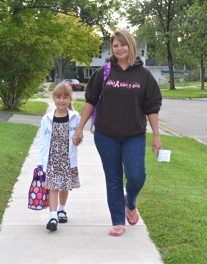 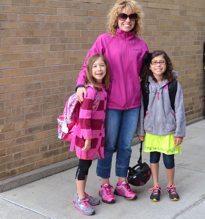 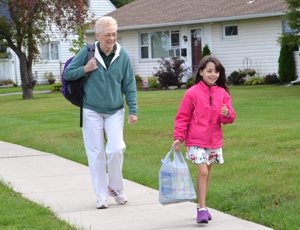 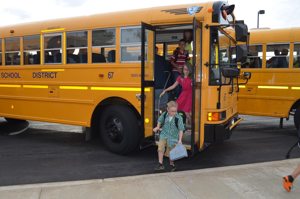 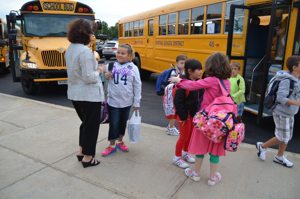 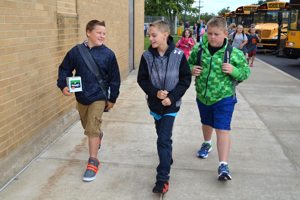 It was a late start to the beginning of the 2013-2014 school year for Grand Island students. The schools opened their door to new and returning students on Monday, September 9th. The teachers were all ready to meet and greet their students and there were a lot of smiling faces at Kaegebein Elementary, as the students went to their classes to meet their teacher and new classmates. 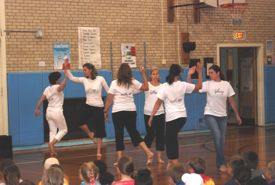 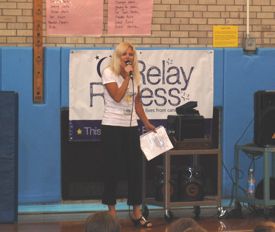 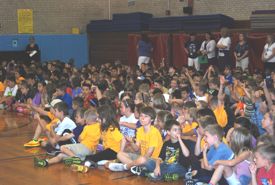 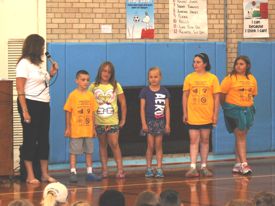 Kaegebein School had a Mini Relay on Tuesday, June 11th. The rainy weather kept everyone inside, but did not dull their enthusiasm. The teachers of Kaegebein performed a moving tribute to all cancer survivors at the Relay For Life on Saturday, June 8th and danced again at the Mini Relay. The song Stay was performed by talented vocalist Ms. Maureen Gambino. The Kaegebein Team Members interpreted a lyrical dance choreographed by their very own Mrs. Jennifer Marsala, where each pair is a mirror of themselves struggling to overcome their battle with cancer and fight for the power to stay with us. Dancers were Miss Jillian Drake, Mrs. Maria Seibert, Mrs. Jennifer Kam, Mrs. Tricia McDonald, Mrs. Cyndi Booker, Miss Lauren Schroder.
Having a Mini Relay is so important because it gives all of the students the opportunity to learn how to fight cancer and prevent cancer in their lives. The T-shirts that students were wearing at the Relay represent 4 themes for learning how to prevent cancer. They are: eating healthy, being physically active, protecting yourself from the sun and being free of tobacco.
This year's Relay Olympic theme was "Go For The Gold" and commemorates the 100th birthday of the American Cancer Society. There were five students that raised over $100 for the Relay team and received a special medal. They are Zoe Coutu, Adyson DiSanto, Ella Rudney, Kayden Tackett and Nicole Malczewsky. At this time the Kaegebein team total is a whopping $5,020.50! The students in Mrs. Cyndi Booker's class ended the presentation with a cheer, We are strong, we are one, we fight cancer for everyone! Students during the day took turns doing laps in the gym. 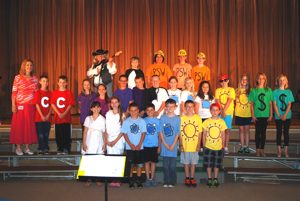 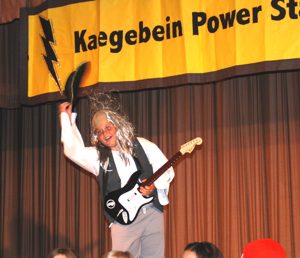 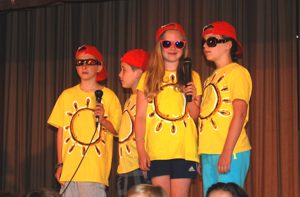 The fourth grade class of Mrs. Katherine Chadwick presented a play on Friday, June 7th titled "It's Electrifying". All members of the class shared facts about electricity dating back to Ancient times. There was lots of music and singing to deliver the "electric" message.

A report from Principal Mary E. Haggerty was released this afternoon stating that Kaegebein School was in "Shelter-In-Place" today following the report of a potential threat to students and the school. The report came from a child, through the parent. "The report was second hand and corroborating information was inconsistent, leading us to believe that the threat was not credible. Out of an abundance of caution, we contacted the Sheriffs Department, our District Office, cancelled our Mini Relay program, and initiated a Shelter-In-Place protocol", said Principal Haggerty. The Sheriff's Department remained on campus all day as a precaution. Unlike a Lock Down, students are allowed to move about the building and teachers are able to use internal communications to give and receive pertinent information. Students were escorted while in the halls as an additional measure of safety. Teachers were directed to keep the shades down to prevent students from being upset by the presence of law officers and their vehicles. 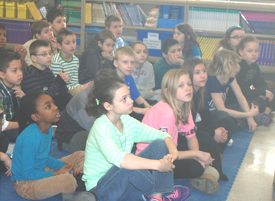 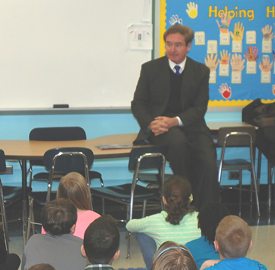 U.S. Representative Brian Higgins was a guest reader on Friday, March 8th for the kick off to the PARP program at Kaegebein. Parents As Reading Partners has been around a long time and is designed to involve parents in fostering the love of reading. The theme this year is "Dream Big, Read!". Rep. Higgins visited the classroom of 4th grade teacher Mrs. Carilyn Gallagher. He spoke to the students about civil rights and read from a Rosa Parks book. The PARP program encourages the family to read together at least 15 minutes per day for 12 days. Everyone who participates will receive a gift bag and have a chance to win one of over 60 free books.

See Slideshow
Thanks to Aaron Bobeck for taking pictures at the Kaegebein Talent Show Friday, March 1, 2013

The Kaegebein Grades 4 & 5 Chorus were invited to sing the national anthem at the men's Canisius College basketball game on Saturday, February 2, 2013. Erie County Legislator Kevin Hardwick was in attendance and so impressed, declaring "the Chorus' performance to be the best rendition of the national anthem he has witnessed in over 23 years of attending Canisius College games." Legislator Hardwick surprised Mrs. Christine Clendening and the choir on Wednesday, March 6th to present the resolution. Mrs. Clendening commented, "As the director of the 4th and 5th Grade Choir at Kaegebein Elementary school, I couldn't be prouder of the singers who performed a traditional rendition of our national anthem at an event as exciting as a Canisius College basketball game. I can't think of a song more honorable than the Star Spangled Banner, and my singers took the performance seriously and carried themselves very professionally. Learning that Mr. Hardwick was in attendance that night and was so impressed with our performance was the icing on the cake, and receiving a surprise visit from him with an official proclamation is truly memorable. This is definitely a highlight of my choral directing experience, and we hope to be invited back to sing for Canisius next year."