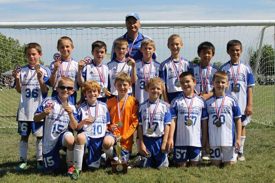 The Grand Island Gladiators soccer team won 1st place at the 2013 Odenbach Cup Tournament in the Boys U10 Group 1 division. The Gladiators went 3-0 over the weekend tournament and beat a strong Clarence Inferno team 2-1 in the championship game. There was not one standout player for Grand Island as 11 of the 14 players tallied a goal. It was a true team effort and victory.

The Grand Island Soccer Club is getting excited about the warmer weather and preparing for 2013 House Soccer Season. Online Registration is available April 1-30 and all boys and girls between 5 and 16 are invited to join. No playing experience is necessary. House Soccer Programs for U6, U7 Micro Soccer, as well as Teams/Games for the U8 through the U16 Age Groups. Please see the web-site, www.gisoccerclub.org for more details regarding the upcoming programs. NEW for 2013: The U15 age group has been split into both U14 & U16 groups.