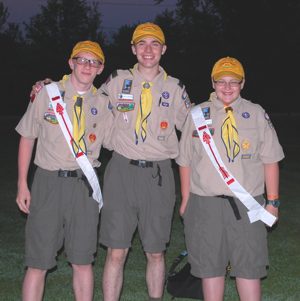 Three members of Grand Island Boy Scout Troop 630 are in West Virginia this week experiencing the Boy Scout National Jamboree. The Jamboree is held every four years and is a huge event attended by over 40,000 Boy Scouts from across the country. Scouts Nolan Miles, John Sosnowski and Steven Stouter left on Sunday, July 14th traveling with the Greater Niagara Frontier Council. During the week they will have the opportunity to white water raft, zip line, BMX ride, skateboard, canopy tours, scuba dive, archery, etc. 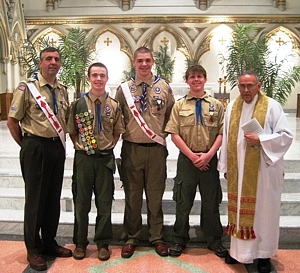 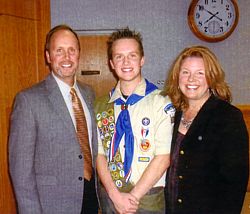 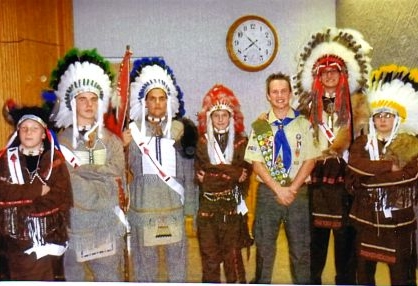 Evan stands with parents Patty and Scott Shaw. Evan's father is an active GIFC firefighter
Evan is flanked by impressive Eagle Scout Court of Honor
GIFC Fire Cadet Evan Shaw was awarded the prestigious Eagle Scout rank during a special ceremony on October 28, 2011 at fire headquarters.
Fire Chief Kevin Koch, who is also an Eagle Scout, reaffirmed Evan's long term scouting commitment which started in 2002 as a Cub Scout and culminated on January 12, 2011 when he reached the ultimate Eagle achievement. His qualifying project while a member of Troop 630 involved a 160-hour cleanup, painting, and repair venture at the Nike Base Community Center, and included 30 other fellow scouts.
Several official proclamations recognized this personal milestone, including one from the Town of Grand Island, which congratulated Evan for his special October 28th Eagle Scout Court of Honor.
Meanwhile, Evan pursued another character building goal when he became a GIFC fire cadet on July 29, 2009 and recently advanced to the position of senior cadet as part of his community service training.
In addition, Evan has earned three separate scholarship grants towards his college studies at the SUNYAB where he is pursuing undergrad courses in biomedical engineering. 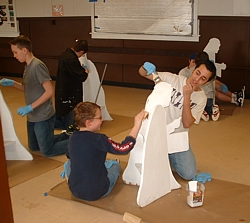 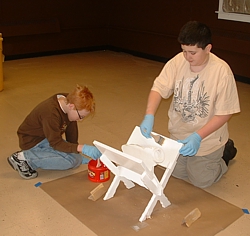 
Boy Scout Troop 630 took some time out of their winter break to prepare for Christmas by painting the Town's Nativity scene figurines. The effort was coordinated by Linda Tufillro, Director of Parks and Recreation. The scouts worked on the figurines in the community center of the Nike Base. 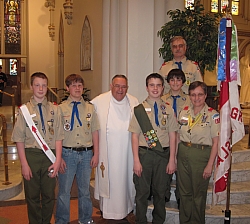 
On Saturday, March 27, 2010, several Boy Scouts from Troop 630, sponsored by Saint Stephens Church, received the Ad Altare Dei Emblem at Saint Josephs Cathedral. These medals were presented at a special Mass for the 100th Anniversary of the Boy Scouts of America. The purpose of the Ad Altare Dei program is to equip the Boy Scout to take his place in the world as a maturing Catholic and American. The requirements center on the Sacraments because it is through them that a person can become a maturing disciple of Christ. The Scouts are Connor Harrigan, Benjamin Shaw, John Sosnowski, and Matthew Wellence.

Boy Scout Troop 630 will host its annual Spaghetti Dinner from Noon till 6 p.m. Sunday, March 21 to benefit the Scouts' Summer Camp Fund. The dinner will be held in the St. Stephen School Cafetorium, 2100 Baseline Rd, Grand Island NY 14072. Cost is adults/$6, seniors/$5, children 3-10/$4 and Children Under 3/Free and dinners will include Spaghetti and Meatballs, Salad, Bread & Butter, Drink and Dessert. Take Outs Available. Presale Tickets Available by calling Carolyn Konopski at 773-0101. Tickets will also be available at the door. Troop 630 is sponsor its by St Stephens Parish. 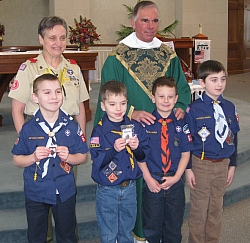 Congratulations to the Boy Scouts of America on the 100th Anniversary of Scouting, to be celebrated on February 8, 2010. Boy Scout Sunday will be celebrated at Saint Stephens Church on Sunday, February 7, 2010 at the 9 AM Mass. All Cub and Boy Scout units on Grand Island are invited to participate. Please arrive at church at 8:30 AM in full uniform with your Unit Flag. We will then process down the aisle at the beginning of the Mass.
Several Cub Scouts from Pack 630 will be honored for their participation in religious activities at Scout Sunday Mass. The Light of Christ emblem, a stepping stone award toward developing a personal relationship with Jesus, will be presented to Vincent Ricotta and Gabriel Wright.
Alexander Melisz and Ryan Wellence will be receiving the Parvuli Dei emblem for advancement in religious and spiritual knowledge. Congratulations go out to these boys who have worked hard since September to receive these awards.