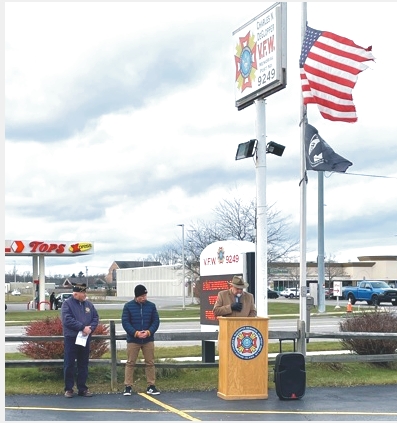 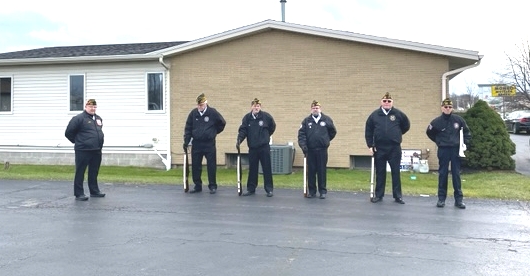 The 80th anniversary of Pearl Harbor Day was recognized at the VFW Post 9249 on Tuesday, December 7th at 11:00 a.m. A small group of hardy souls braved the elements to pay their respects.

The Grand Island VFW Post #9249 is participating in a National Scholarship program for grade 6-12. The Patriots Pen program is for grades 6-8 and the Voice of Democracy is for grades 9-12. Deadline for both is October 31st. See flyer for more details. Applications can be found at vfw.org.

VFW Post 9249 will be having a Burger Burn on July 3rd at 2121 Grand Island Blvd. They will be offering burgers, hotdogs, chips, soda and strawberry shortcake. The event will be in the front parking lot during and after the parade. COVID guidelines for gathering on the property as that day will be followed. We appreciate your support as always. Hopefully, the 4 of July Open house tradition can return in 2022.

Poppies will be available on Thursday, Friday & Saturday, May 27-29 at Speedeway, Whitehaven Road, 7-11 on Love Road and Top's Market.
Below from the VFW website:
Before Memorial Day in 1922, we conducted our first poppy distribution, becoming the first veterans' organization to organize a nationwide distribution. The poppy soon was adopted as the official memorial flower of the Veterans of Foreign Wars of the United States, as it remains today. During our 1923 encampment, we decided that VFW "Buddy" Poppies would be assembled by disabled and needy veterans who would be paid for their work to provide them with financial assistance. The next year, disabled veterans at the Buddy Poppy factory in Pittsburgh assembled VFW Buddy Poppies. The designation "Buddy Poppy" was adopted at that time.
In February 1924, we registered the name Buddy Poppy with the U.S. Patent Office. A certificate was issued on May 20, 1924, granting our organization all trademark rights in the name of Buddy under the classification of artificial flowers. We've made that trademark a guarantee that all poppies bearing that name and the VFW label are genuine products of the work of disabled and needy veterans. No other organization, firm or individual can legally use the name Buddy Poppy. Today, our Buddy Poppies are still assembled by disabled and needy veterans in VA Hospitals.
The VFW Buddy Poppy program provides compensation to the veterans who assemble the poppies, provides financial assistance in maintaining state and national veterans' rehabilitation and service programs and partially supports the VFW National Home For Children. Show your support today. Host a Buddy Poppy drive in your town, or have your local government issue a special proclamation.

Better late than never! VFW Post 9249 hosted a drive-thru Easter celebration on Saturdfay, Arpril 3rd at the DeGlopper Memorial. Between 11:00 a.m. - 2:00 p.m. were invited to drive-thru for Easter treats. They could also have their picture taken with the Easter bunny.

Patriot's Day is an annual holiday celebrated on the third Monday of April. It commemorates the Battle of Lexington and Concord which took place on April 19, 1775, and were the first battles fought in the American Revolutionary War.
Before the War for Independence, the colonies in the area around Boston were heavily controlled by British Rule. The people were unhappy with this, and as a response, the residents in those colonies took arms and went to battle against the British. British forces were on the move to seize rebel arm caches. So, on April 19, 1775, the fight for independence officially began, and the first shots of the American Revolutionary War were fired in the battles of Lexington and Concord. Unbeknownst at the time, these battles were the ones who originated the creation of the United States of America.
The key figure associated with Patriots' Day is Paul Revere, a silversmith, who was the one who rode to Lexington in the night to alert the people of the British invasion. William Dawes was another accomplice and a relay team of riders spread the alert throughout the countryside.
In 1864 the Lexinton Historical Society called for April 19 to be known as "Lexington Day". However, not thinking this was fair, the people in Concord thought it should be named "Concord Day". Eventually, they compromised on Patriots' Day.
This day is not to be confused with Patriot Day, which happens on September 11 and remembers the anniversary of the attack on the World Trade Center.
Patriots' Day is a public holiday in the states of Maine and Massachusetts, where people have the day off and schools and businesses are closed for the day. Even though other states in America observe this day, it is not a federal holiday. It is also the day the Boston Marathon is run.

The Charles N. DeGlopper Memorial VFW Post #9249 Auxiliary invites you to enter their National Anthem Singing Contest. Contest is open to youth ages six to sixteen. Record a video of your solo vocal performance of "The Star-Spangled Banner", save the video to a DVD, flash drive or video platform and submit by March 31, 2021.
See contest flyer here. You can find the "Get Excited for the Red, White & Blue" entry form at the National VFW Auxiliary website here.

National Law Enforcement Appreciation Day is a day for our citizens recognize the difficult and sometimes impossible career people in law enforcement have chosen in public service to us all.
Facts About Law Enforcement and Outreach:
In 2019, there were 228 officer suicides nationwide and 172 in 2018. The ultimate goal of LEAD is to recognize the difficulties people in law enforcement may face, and to build a larger focus on officer/law enforcement wellness and support from the community.
The Department of Justice recently launched the HERE, HELP, HOPE campaign. It is for anyone who is in law enforcement. At anytime anyone can call 1-800-273-TALK or text âblueâ to 741741.
C.O.P.S. National Conference also supports National LEAD by holding a conference that offers needed focus on officer wellness and the need to proactively address the cumulative stresses that can occur over an officerâs career. This conference is for all law enforcement officers (active or retired) nationwide.
How You Can Show Your Support for Law Enforcement Appreciation Day:
Wear blue clothing in support of law enforcement.
Send a card of support to your local police department or state agency.
Share a story about a positive law enforcement experience on social media.
Ask children in your community to write letters in support of law enforcement.
Organize an event or a rally in support of your law enforcement officers.
Advertise your support through local media outlets/billboards.
Post the public service announcement supplied by C.O.P.S. to your organizationâs web page or social media pages.
Coordinate and/or participate in a Blue Blood Drive.
The most important thing you can do on this day is to thank a person in law enforcement for the work they do every day.