Charles DeGlopper was an amazing young man, read all about his heroic deeds in the articles linked below. 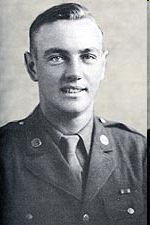 Medal of Honor Citation
The President of the United States, in the name of The Congress, takes pleasure in presenting the Medal of Honor to

for service as set forth in the following CITATION:

He was a member of Company C, 325th Glider Infantry, on 9 June 1944 advancing with the forward platoon to secure a bridgehead across the Merderet River at La FiÃ¨re, France. At dawn the platoon had penetrated an outer line of machineguns and riflemen, but in so doing had become cut off from the rest of the company. Vastly superior forces began a decimation of the stricken unit and put in motion a flanking maneuver which would have completely exposed the American platoon in a shallow roadside ditch where it had taken cover. Detecting this danger, Pfc. DeGlopper volunteered to support his comrades by fire from his automatic rifle while they attempted a withdrawal through a break in a hedgerow 40 yards to the rear. Scorning a concentration of enemy automatic weapons and rifle fire, he walked from the ditch onto the road in full view of the Germans, and sprayed the hostile positions with assault fire. He was wounded, but he continued firing. Struck again, he started to fall; and yet his grim determination and valiant fighting spirit could not be broken. Kneeling in the roadway, weakened by his grievous wounds, he leveled his heavy weapon against the enemy and fired burst after burst until killed outright. He was successful in drawing the enemy action away from his fellow soldiers, who continued the fight from a more advantageous position and established the first bridgehead over the Merderet. In the area where he made his intrepid stand his comrades later found the ground strewn with dead Germans and many machineguns and automatic weapons which he had knocked out of action. Pfc. DeGlopper's gallant sacrifice and unflinching heroism while facing insurmountable odds were in great measure responsible for a highly important tactical victory in the Normandy Campaign.


Supervisor Mary Cooke passed along the following information. "The Postal Service has issued Medal of Honor postage stamps featuring both the Navy and Army medal and honoring the 464 World War II soldiers who received this honor. Charles DeGlopperâs name is halfway down on the first page of names in the folder holding the stamps. Get some at the Post Office on your next visit."