Islanders In The News Web Page
2021 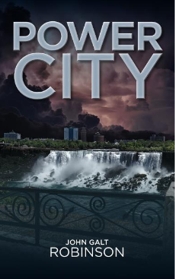 John Galt Robinson is an Island native and GIHS Class of 1986 graduate. He wrote: "One of my main characters in this series is also a Grand Island native. Most of this novel takes place on Grand Island and Niagara Falls."
KCM Publishing, a division of KCM Digital Media, LLC, has published Power City by John Galt Robinson. The book is available currently in both trade paperback and digital formats and can be ordered on Amazon or through Ingram for bookstores.
In Power City, the action starts right away as a man is mysteriously swept over Niagara Falls and down the river. The city of Niagara Falls, nicknamed The Power City, finds itself in the shadow of a new power broker, the Catalano organization where corruption and people disappearing are a normal course of business.
When Navy SEAL Lieutenant Joe OâShanick becomes their next target, a deep underworld is exposed where no one is safe, and the law doesnât protect. âI focused on a much deeper level of character development in this next book,â said Robinson. âWhile this is an action novel, I am highlighting selfless ties to family and faith as beacons that are timeless winners.â
About the Author John Galt Robinson is a practicing Emergency Medicine physician. He weaves his experiences from the exciting, tragic and sometimes humorous world of emergency medicine into a much larger story with intriguing characters who tackle relevant social issues in a fast-paced adventure. John earned his medical degree at East Tennessee State University after a previous career in Sports Medicine as a Certified Athletic Trainer. He lives in South Carolina with his wife and family where he is an active sailor and triathlete. In his second novel, Power City, he further develops the main characters from Forces of Redemption in a compelling sequel. 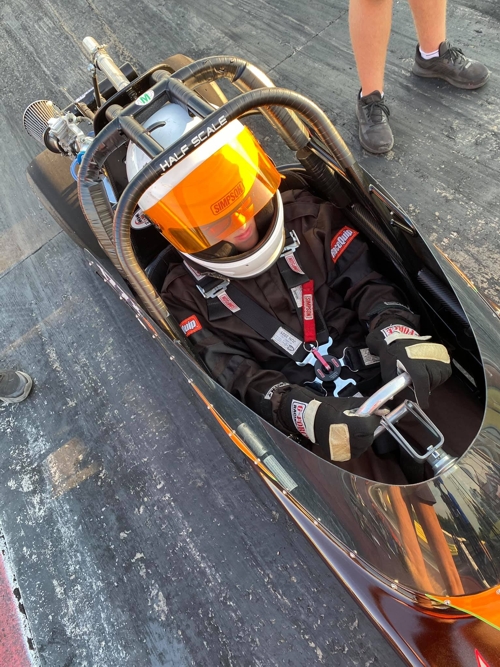 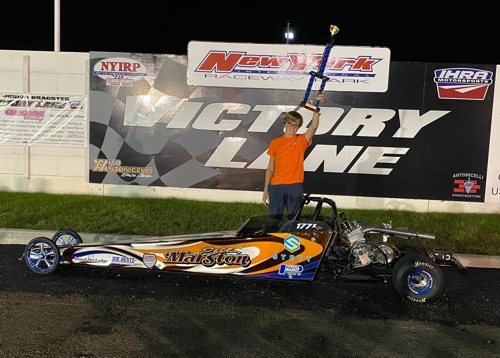 Report by Peter Marston Sr. - Final points race at Lancaster Speedway, PJ Marston finished #1 in the series!! Anyone who races understands what an honor it is to win a points championship, itâs a lot of hard work, discipline and emotion. Winning two, he also won points at Empire Dragway, in one year is virtually unheard of,, yet,,, he did it!! No Junior dragster driver has ever won both tracks simultaniously Itâs been incredibly humbling to watch him grow into a fierce competitor and an exceptional sportsman. We couldnât be more proud!! Looking forward to our post season including division finals and the world finals in Memphis TN. Thanks to all that support us, we could not do it without your help!! Stett Transportation; Pinto Construction; Island Pet Lodge; Joe Dentz; Marston Power; Jan-Cen & Greg Kerl Automotive. 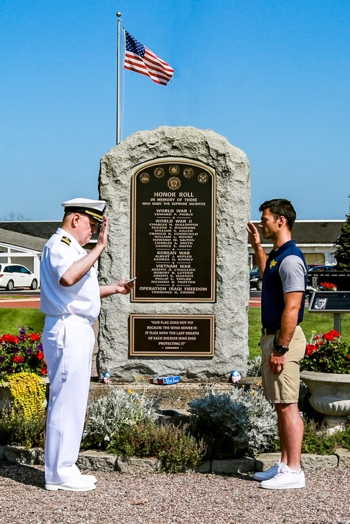 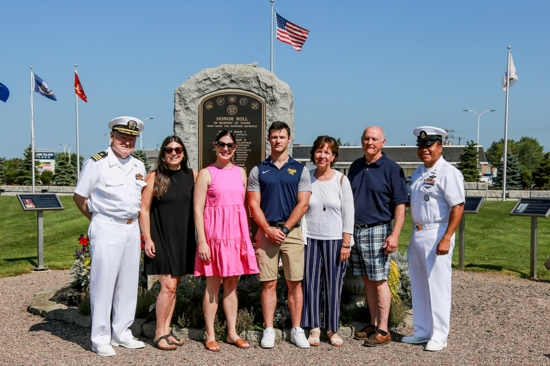 On Tuesday, August 24th, James Niland III was sworn into the Navy to become a Navy Pilot. The ceremony took place at DeGlopper Memorial Park with family, friends and local veterans looking on. The Officating Officer was Wayne P. Sorrentino, USN (Ret.).
Recruiting Officer Samuel Sobrino wrote the following; James will be attending Officer Candidate School (OCS) in Newport Road Island in September 2021. OCS is a 12 week program similar to Bootcamp but for civilians who have applied to be Naval Officers. He will be led and instructed by Navy and Marine Corps drill instructors as he transitions into military life. At the end of OCS, James will commission as an Ensign O-1.
After OCS, James will be assigned to a Naval Air Station Pensacola, FL were he will start his primary Aviation training for 22 weeks. He will undergo class room and simulator training, then flight training in a T-6A Texan II. Once James completes this first phase of flight training, then he will go through a pipeline selection. This is based on his performance and preferences during his initial training. James could be assigned to fly anything from a multi-engine prop to a helicopter to a Navy Jet.
Being selected as a Navy Pilot is no easy task. Civilians are screened on academics, athletics, leadership qualities and moral values. I have been a Navy Officer recruiter for 2 years and I look for applicants with qualities similar to James who was selected out of 269 applicants. James graduated from Canisius College with high honors and was a three sport athlete when he attended Grand Island high school playing baseball, football and track and field. Many of his leadership qualities came from Grand Island High School as he was the Caption for both the baseball and football teams. 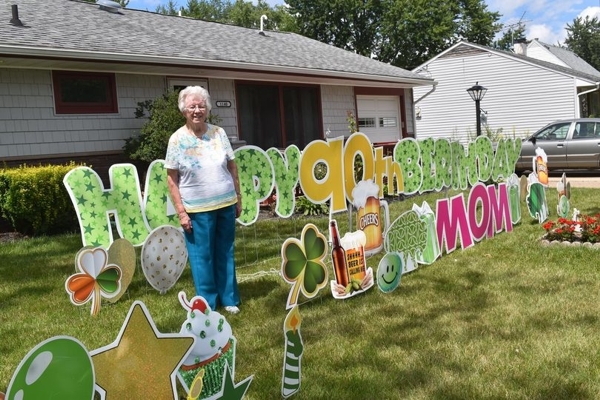 Friday, the 13th, was a special day for Bonnie Sommer, of LaSalle Ave, who turned 90 years old. No one could miss the happy birthday signs her daughter-in-law put up to let people know as they drove by. A gathering of family and friends was held Saturday to celebrate this special day.

A GoFundMe page has been set up to raise money for Parkinson's Boxing in Kenmore. GI native Justin Figler is behind it, in honor of his dad Roman Figler who has seen "overwhelming" results in his battle against Parkinson's Disease, after training began. Money raised will go for equipment. You can donate HERE. On September 1st, Justin will be running four miles, every four hours, for 24 hours, in honor of his dad. 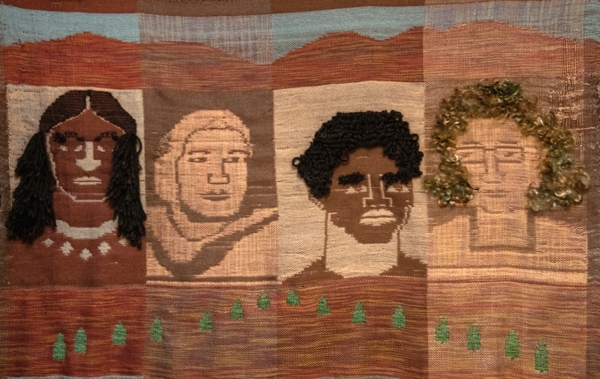 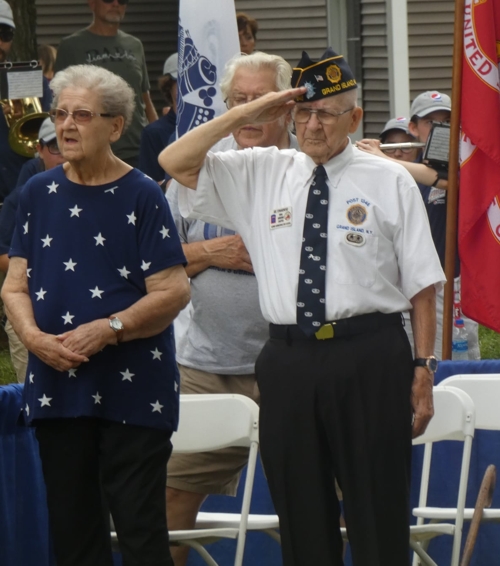 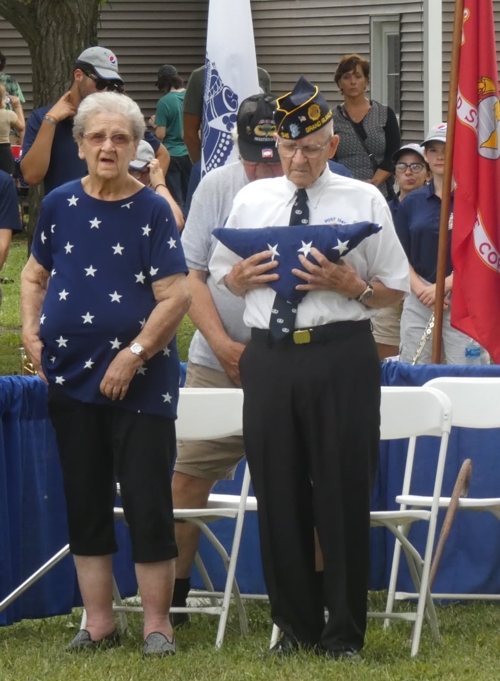 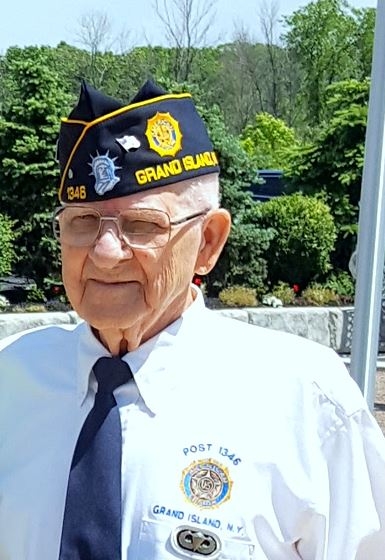 Joe/John Synakowski was chosen as Erie County Fair Veteran of the Day for August 17, 2021. Joe served in the Army as a Private First Class from 1945-1948. Joe/John has been a very active member of the American Legion for 47 years, raising funds to help veterans and educating others about the sacrifices made by our military. He uses his brother Joe's birth year that was three years earlier than his own to enter the Army in 1945 when he was 15 years old. Joe/John served here at home and in Europe as a member of the 82nd Airborne and the 301st Military Intelligence Unit. He was an interpreter in the Polish Displaced Person Camps in 1948. Joe/John was instrumental in bringing the recently dedicated life-size bronze sculpture of Grand Island WWII Jerp amd Medal of Honor recipient Pfc. Charles N. DeGlopper to fruition. A ceremony will take place on Tuesday, August 17th at 6:30 p.m. at the flag pole in Slade Park. Everyone is welcome to attend and show their support. 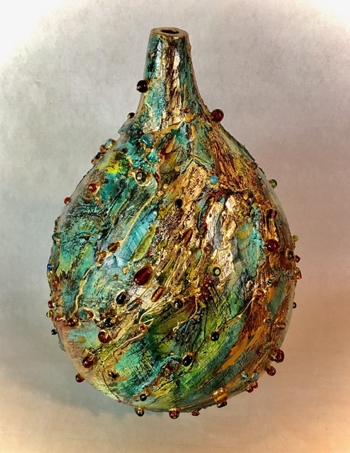 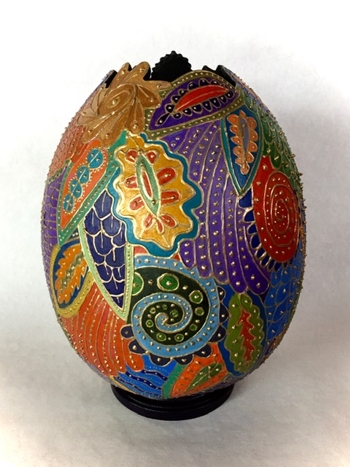 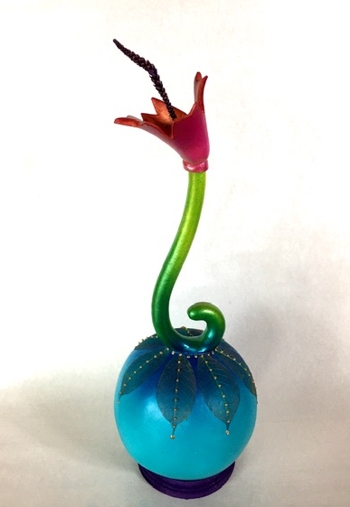 Island artist Joann Vanderheite has again been invited to participate in the Kenan Center Artisan Festival in Lockport. It is the 50th anniversary year and will take place on Saturday & Sunday, July 10th & 11th, from 10:00 a.m. - 5:00 p.m. Featured above is some of her gourd art. See FLYER. 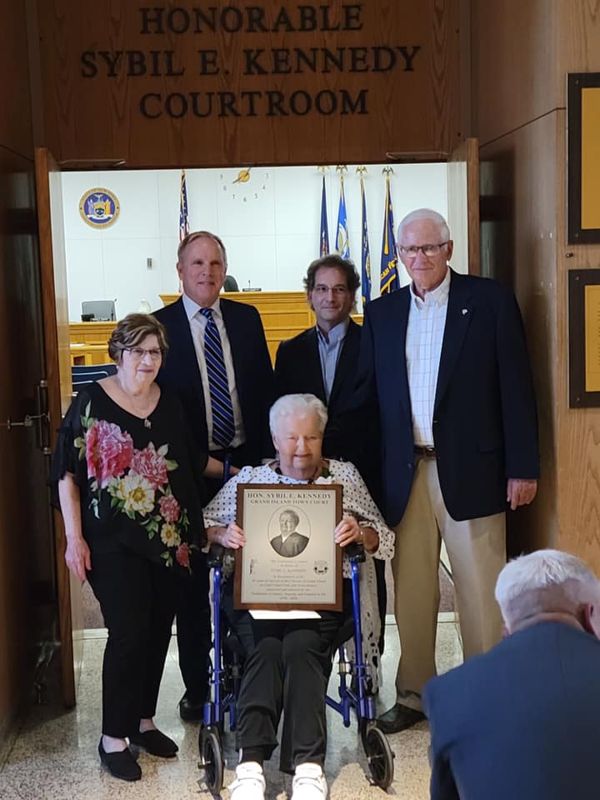 On Monday, June 7th the Grand Island Court Room was named the Honorable Sybil E. Kennedy Courtroom. In 1970, Justice Kennedy was asked to help out âfor a few weeksâ in the Grand Island Court and she went on to hold the position of Chief Clerk of the Court for over 30 years. In 2000, she ran for Town Justice, and was so for the next 20 years. 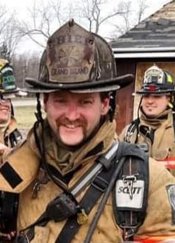 Erie County Department of Homeland Security & Emergency Services announced: We would like to congratulate EC Fire Instructor Matt Osinski on his recent promotion to Buffalo Fire Department Battalion Chief assigned to the Training Bureau. Matt will be leaving us as a County Fire Instructor where he's been since 2003...18 years. His past experience with the BFD as well as a past Chief and firefighter with the Grand Island Fire Company has provided our county firefighters some of the best training possible. As his new endeavors will keep him extremely busy, the good news is he's only one door away in our building. Join us to congratulate and thank Matt for his years of service to the county and his continued success in keeping our firefighters safe! 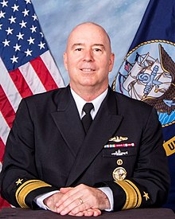 Secretary of Defense Lloyd J. Austin III announced on April 27, 2021 that the president has made the following nomination: Navy Rear Adm. William J. Houston for appointment to the grade of vice admiral, and assignment as commander, Naval Submarine Forces; commander, Submarine Force, U.S. Atlantic Fleet; and commander, Allied Submarine Command, Norfolk, Virginia. Houston is currently serving as director, Undersea Warfare Division, N97, Office of the Chief of Naval Operations, Washington, D.C. Vice Adm. Houston is a 1986 graduate of Grand Island High School and a 1990 graduate of The University of Notre Dame where he earned his commission through their Naval ROTC program. 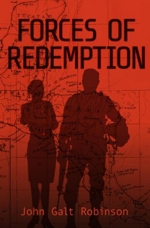 March 9, 2021 - KCM Publishing, a divisionof KCM Digital Media, LLC,has published Forces of Redemption by John Galt Robinson. The book is available currently in both trade paperback and digital formats and can be ordered on Amazon or through Ingram for bookstores.
Forces of Redemption draws the reader in right away with the rescue of a young Honduran girl from a gang that has deep roots in human trafficking. Dr. Christine âChristyâ Tabriziâs selfless desire to make a difference lands her in the underworld of malevolent cartels in a fast-paced action ride putting her life in grave danger. When a new U.S. president of Mexican heritage declares war on the drug cartels in Central America, Navy SEAL Lieutenant Joe OâShanick is deployed to lead an elite team into hostile territory for a rescue mission and to disrupting criminal operations. The protagonist grew up on Grand Island and several chapters take place here.
âI write from firsthand understanding of the medical community and my interest in elite military teams,â said Robinson.âMy research led me to the development of multiple interesting true to life characters that have enduring qualities.âForces of Redemption is available in 245 territories worldwide and wherever books are sold.
About the Author: Island native and GIHS Class of 1986 graduate, John Galt Robinson is a practicing Emergency Medicine physician. He weaves his experiences from the exciting, tragic and sometimes humorous world of emergency medicine into a much larger story with intriguing characters who tackle relevant social issues in a fast-paced adventure. John earned his medical degree at East Tennessee State University after a previous career in Sports Medicine as a Certified Athletic Trainer. He lives in South Carolina with his wife and family where he is an active sailor and triathlete.His debut novel, Forces of Redemption has established Robinson as a dramatic novelist. A sequel has been submitted to the publisher and takes place almost exclusively in Niagara Falls and on Grand Island. 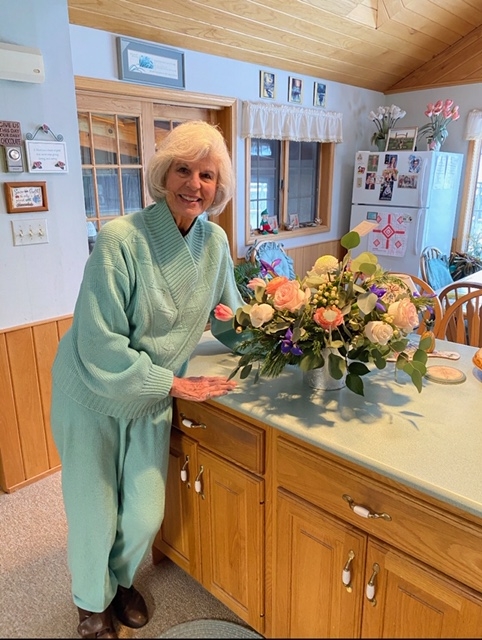 Affectionately known as Grandma Rayhill, Mrs. Edward A. Rayhill celebrated her 90th birthday on Grand Island, January 27th with her husband Dr. Edward A. Rayhill via a family zoom. She has four children, eight grandchildren and six great grandchildren. She was born on her mother's birthday in 1931. Among other gifts, she received a bouquet of fresh flowers from Maureen's Florist on Ellicott Street to commemorate the occasion and is looking forward to a family reunion this summer. 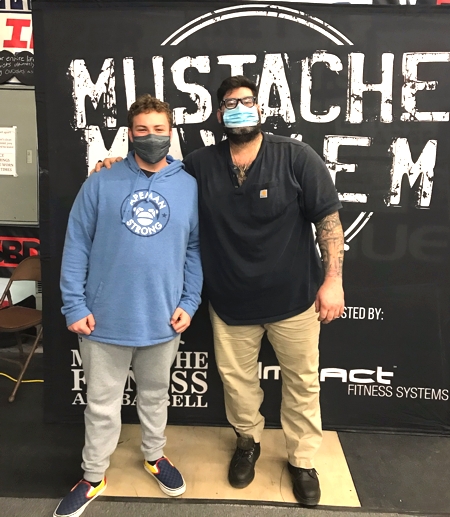 Competing at the fourth annual Mustache Mayhem, Michael Christensen, a sophomore at Grand Island High School, qualified for the USA Powerlifting High School Nationals in Denver, CO with an aggregate lift - bench, squat, deadlift - of 1,111 pounds. Competing in the 93 kg class, Christensen bettered his mark of a year ago by 306 pounds. Christensen trains at Mustache Fitness and Barbell in Tonawanda with Carley Skarupinski. 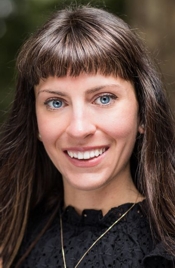 Susan Furber was a long-time Grand Island resident, graduating in 2010 from Grand Island High School. She holds a B.A. in English and Philosophy from Saint Maryâs College, Notre Dame, and spent a year at the University of Oxford. Susan is an editor and lives in London with her husband. Her first novel, The Essence of an Hour, will be published by Valley Press in February 2021. See description here. 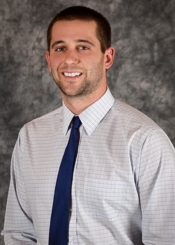 Buffalo, NY â January 19, 2021, Barton & Loguidice, (B&L), a northeast regional engineering, planning, environmental, and landscape architecture firm announces that Matthew J. Zarbo, P.E., of the firmâs Buffalo office have received a promotion in 2021. Zarbo has been promoted Senior Project Engineer. A resident of Buffalo, NY, he received his B.S. degree in Civil Engineering from Clarkson University. Zarbo is a member of the firmâs Water/Wastewater Practice Area.