In promoting fitness and family activities, the Town of Grand Island Parks & Recreation Department is sponsoring a Family Sports Obstacle Race at Veterans Park, on Saturday, November 10th at 10:30am. Each team will consist of a family or group of 4 people  running a course of obstacles in a timed fashion. See complete details and entry form.

The Town of Grand Island Parks & Recreation Department is sponsoring a Scarecrow Decorating Contest. The contest is open to children 2 - 13 years-old. Figures must be of homemade materials (no store purchased figures) and at least 4 feet tall. Contest ends Monday, November 12, 3:00pm. See contest rules for details. 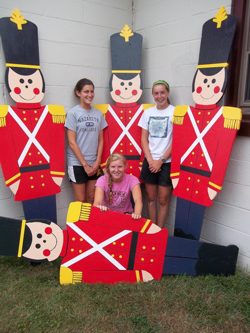 Grand Island Parks & Recreation tennis staff not only teach tennis but have a very artistic hand in painting. Toy soldiers used during the Towns outdoor holiday display were repainted by Kelsey Mash, Sarah Williams and Carleen Conway. Be sure to look for the soldiers this winter in the Town Commons. Programs planned this year are Welcome Santa and "A Holiday Light Parade." 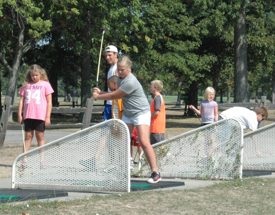 Sticks for Kids is a National program to help kids have fun learning to play golf and encourage family interaction. The program is sponsored by U.S. Kids Golf. The Grand Island Recreation Department ran an instructional program at Veterans Park during the summer for youths 7-11 years-old. The final class was a trip to Beaver Island Golf Course and a clinic run by Jason Dombrowski. Approximately 25 kids participated in the program. Grand Island Parks & Recreation has announced Ed Ball Park playground at the corner of Love and Stony Point roads is now up and ready for use. The large play equipment includes a swingset, slide, spring riders and a climber. The equipment was a donation from an Island family. Still to come is a funnel ball game, bike rack and pathway. In the future the Recreation Department hope to install a larger shelter. This was a great community project. A large thank you goes out to all of the volunteers. Post holes were donated by "Bills Post Hole Driller". Ray Gress led a group of volunteer community helpers in the patrol, set up and clean-up of the area. The Town Parks Department installed the equipment and tree beds. The Town Highway Department delivered and placed the decorative boulders on site. A fishing contest was held at the new waterfront park, "Fisherman's Landing" on Saturday, June 23, 2012. Taking advantage of the New York State Free Fishing Weekend, this first time catch and release event had two sessions. Eight contestants tried their luck at the morning session, which ran from 8 - 11 a.m. Eleven contestants, participated in the evening session, which ran from 5 - 7 p.m. Only one 8" perch was caught in the evening by John Vogel, assisted by grandson Matthew. The morning session was the most productive. Several perch, rock bass, small mouth bass and a cat fish were hauled in. Contestants Cody Thomas caught four perch and a small mouth bass, Joe Torregrosse - two perch, Regina Guenther - one catfish, William Esquerro - two perch, John Hoffman - one perch, and one rock bass. Everyone enjoyed themselves, even if they didn't get a fish. The Grand Island Recreation Department extends a special thank you to John Vogel for taking on the job of reporting contest official in the evening session. 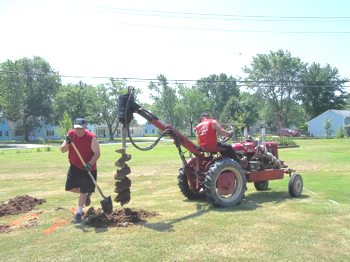 The improvements to Ed Ball Park, located at the corner of Love Road and Stony Point, have begun. New playground equipment will be installed with a completion date scheduled for use by mid July. Recreation Advisory Board member Ray Gress and Bill Click, owner of Bills Post Hole Service, are shown drilling the holes for the playground's main supports. Mr. Click volunteered his service for this project in support of activities for kids. Mr. Gress is spearheading the neighborhood volunteer group that is in full support of the new playground for the kids of the area. 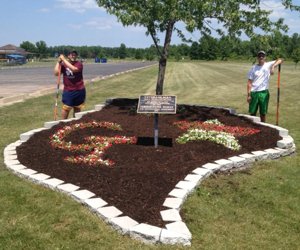 From left Dave Cole and Jared Billica - Click photo for larger view
Grand Island Parks & Recreation Crew Chief Tom Dworak recently sent in a photo of a landscaping project just completed at Veteran's Park. The idea was to spruce up the entrance to the field area and give it an "island" feel. The task was assigned to Jared Billica and Dave Cole. The men created the design and did the landscaping. Mr. Dworak said he and his employees have plans to add interest to other areas of the park this year.

The Town of Grand Island Parks & Recreation Department is sponsoring a Fishing Contest at Fisherman's Landing on Saturday, June 23rd. This catch and release program will have two times to participate, 8am-11am or 5pm-7pm. This is a free fishing day for the public, no license required. See information sheet for details. 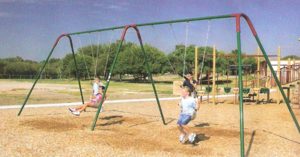 This Summer the play area at Love Road and Stony Point Road will be equipped with new play equipment; a swing set, two spring animals, a matterhorn climber and slide. Original play equipment was pulled from Ed Ball in 2010 and plantings were put in its place. Due to standards and play equipment regulations, new apparatus and safety surface will be installed in the center of the lot, with access from Love Road. The project is scheduled to be completed for use this Summer.

The town's Independence Day parade, themed "Freedom is a Chance to Be Better," will be held on Wednesday, July 4. Events will include the Dick Bessel Run and kids run. Races begin at 9 a.m. on July 4 followed by the parade. Entry forms for the races will soon be out and online at score-this.com. Parade entries are being accepted by contacting the Recreation office for more information.
The parade and races will be held on Grand Island Blvd. from Webb Road to Baseline Road. 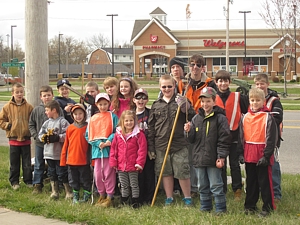 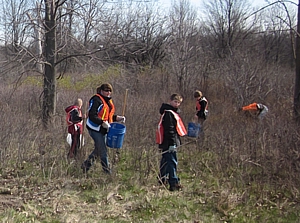 Click photos for larger view
On April 10th, Cub Scout Pack 630 teamed up with Boy Scout Troops 630 and 510 from Grand Island for their annual cleanup-up of litter on Baseline Road between Rite Aid and the Post Office. Town Recreation Director Linda Tufillaro supplied rakes, gloves and garbage bags. The scouts collected over eight cubic yards of litter, trash, car parts, signs, lumber and boxes for their community service vacation project while the boy scouts logged well deserved service hours. The 28 youths and five leaders spent over three hours cleaning up an area that nearly every resident on Grand Island passes by. Youth ages ranged from 6  16 years of age. Hats off to the scouts, leaders and parents Steve Winder, Kimberly Wright, Steve Winder Held, and event organizer Assistant Cubmaster Ted Kessler for bringing the boys and girls together during their spring break. A special thank you to the resident who stopped by and purchased the group pizza and pop for their efforts! The next clean up will be Saturday, April 28, 2012 at 10:00 a.m. along the creek behind Burger King and Tim Hortons. All are welcome to participate. 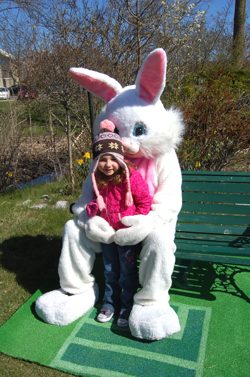 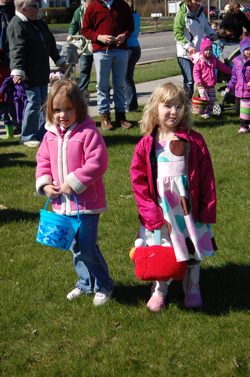 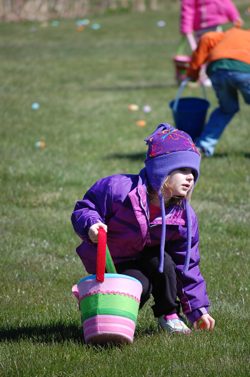 The Town Recreation Department's "Island Bunny" visit and egg hunt on Friday morning, April 6, 2012 was well attended and unlike what we've been reading, there were no rambunctious parents snatching eggs for their children and pushing others out of their way. The kids had a great time, thanks to Linda Tufillaro and Town Recreation. 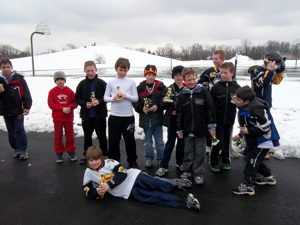 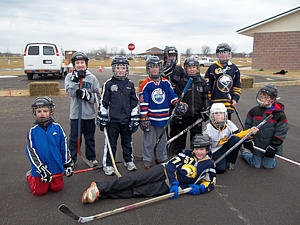 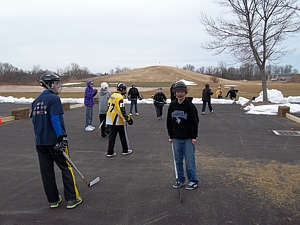 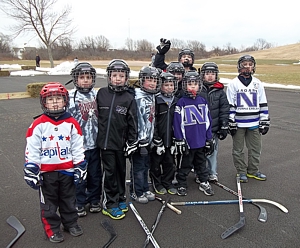 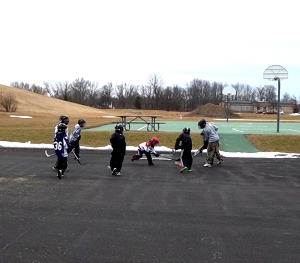 The Grand Island Parks and Recreation Department will host a street hockey tournament for youths ages 6  14 years old on February 21, 22 and 23rd during school winter break. This event will be conducted at Veterans Park from 10 AM  2 PM each day. Come play as a team or individual. Helmets and protective equipment are required. Bring your own stick, sneakers or boots, no goalies used. There will be two - 15 min. periods, you play each team twice, best record wins. Age group break down; 6  8, 9  11 and 12 -14 yrs. Games start at 10:00 AM, Veterans Park parking lots, schedule to be posted after teams established that first day.

The Town of Grand Island Parks & Recreation Department and Branches of Niagara Campground are hosting a weekend of pond hockey, outdoor volleyball and assorted activities in February. The weekend is February 18 & 19, 2012 and you need to register early as space is limited. See complete information for all the details. Along with the tournaments, youth activities include hockey shoot, putting contest, obstacle course, three-legged race and a egg toss. Ongoing activities include ice fishing, hay rides, sled dogs, snow & fun hill, snow sculpture and a bonfire. Call the Recreation Department at 773-9680 for entry information.