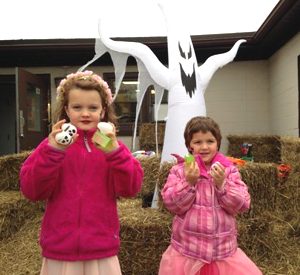 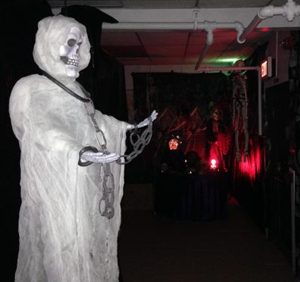 See Slide Show.
The Grand Island High School Art Club and the Grand Island Recreation Department worked together to put on a weekend of Halloween activities at the Nike Base on Friday and Saturday, October 25th & 26th. Over 200 children, teens, and adults enjoyed activities that took place Friday and Saturday night from 7:00-10:00 p.m. and Saturday from 11:00 a.m.- 3:00 p.m. All proceeds from the event went to the Art Club. The "Haunted House" and "Spooky House" were designed and built by the Art Club lead by Cindy Wynne. Many student and parent volunteers helped design, then built and acted in the "Haunted House" for teens and adults. On Saturday afternoon the Haunted House was transformed into a "Spooky House" for younger children. In addition to the "Spooky House" the GI Recreation Department had a "Halloween House of Fun" with activities that included, a hay bale treasure hunt, scare crow building, pumpkin painting, face painting by art club members, witches hat ring toss, Jack-O-Lantern bean bag toss and candy corn bowling.

The Town Recreation Department is sponsoring a Slow Pitch Softball Tournament on Friday and Saturday, September 6th & 7th at the Nike Base and Kaegebein School. The tournament is limited to 12 teams and the entry deadline is Friday, August 23rd. See flyer, details and registration form. 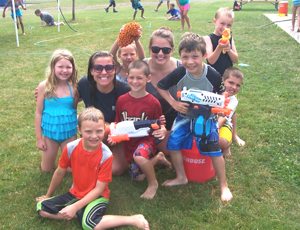 See Slide Show.
The GI Recreation Department Summer Sports Camp program "beat the heat" on Wednesday, July 18th. With the temperature in the 90's, Veterans Park was turned into a water world by Recreation Supervisor Joe Menter and his staff. A pop-up tent was outfitted with sprinkler hoses, large containers of water were available to load up water guns and water balloon games were all used to keep things cool. 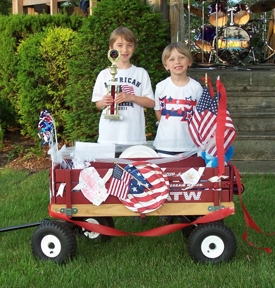 The annual Recreation Department Wagon Decorating Contest was held on Tuesday, July 2nd at the Town Commons during the weekly Band Concert. Children between the ages of 4 and 8 were invited to decorate a wagon and were judged on overall look, patriotic theme and details. A team of brothers were the winners, they are Luke and Brody Winarski. 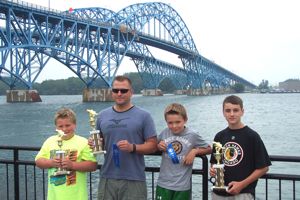 The Grand Island Parks & Recreation Department is sponsoring a Summer Volleyball League starting the week of Monday, June 3rd at Veterans Park courts. There will be three leagues, Junior Men's (16-20), Mixed (18 and up) and Men's (21 and up). See flyer for more details.

The Grand Island Parks & Recreation Department has released a list of upcoming activities for Spring/Summer 2013. The adult softball and volleyball leagues will start in May. Contact the rec. office at recreation@grand-island.ny.us for details or to sign up. Starting at the end of school, kids will have outdoor fitness fun, nature programs and craft time available to attend. Registration is required for nature studies and fitness and takes place mid June.
The Memorial Day Ceremonies are scheduled for Monday May 27th at Charles N. DeGlopper Park at 10:00 a.m. The Independence Day Parade and Run will be held on Thursday, July 4th starting at 9:00 a.m. Entry forms for the race will be available soon at www.score-this.com.
Outdoor band concerts will begin Tuesday, July 2nd at the Gazebo in Marion Klingel Town Common at 7:00 p.m. The concerts are free and open to the public. Check out the flyer for details on all the activites.

The Grand Island Parks & Recreation Department is sponsoring a hockey tournament on February 19, 20 & 21 at Veterans Park. The plan is to have a ice hockey tournament and a street hockey tournament. It is open to youth 6 - 14 years, come play as a team or as a individual. See flyer for more details. 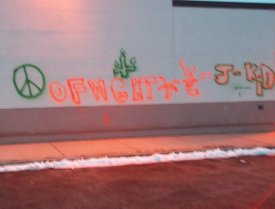 The weekend of December 29th, vandals hit the Parks & Recreation Nike Base facility on Whitehaven Road. Buildings, vehicles and equipment were spray painted, windows broken, door handles smashed and the Golden Age bus has been temporarily put out of commission. This act of vandalism is not the first. This past summer vandals broke into buildings and released several fire extinguishers.
The cost to the public to correct this vandalism will be excessive; to clean and repair from what appears to be juveniles that have too much time on their hands and have predetermined that destroying property is the thing to do! WHY? With all that this Town offers to our kids, why are they so intent on destroying?
Parents  do you know where your children were on the evening of Sunday, Dec 30th? Did they come home with green and/or orange paint on them? On their clothing? The Erie County Sheriffs Department is investigating this event. Meanwhile, our senior citizens, who truly enjoy their time at the Nike Base facility, are reminded daily of the acts that were done. They are greeted each morning with brightly colored vulgarity on their buildings. The bus that provides the elderly and those needing physical assistance to medical facilities off the island is out of commission. The Golden Age Center members have been forced to find alternative transportation and field trips that are so very anxiously awaited for, are for now, cancelled.
Anyone with information please contact the Sheriffs Department at 858-2603 or Town Supervisor - Mary Cooke at 773-9600 x 616.

The Town of Grand Island Parks & Recreation Department has announced the annual Snow Sculpture Contest has begun and a Saturday Crafts Class has been added to the winter activity schedule. The class begins on January 12th at the Nike Base. The contest will run untill March 22nd. Click on links above for more details.