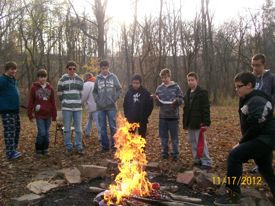 During the fall and winter months, the Boy Scouts in Troop 510 have been having a great time with indoor and outdoor activities. Recently, Troop 510 held an Open House to attract new members. The boys constructed Marshmallow Shooters out of PVC pipes of various sizes that were generously donated by Guis Hardware Store on Whitehaven Road. At the annual Fall Camp-Out the troop held a Flag Retirement Ceremony while learning about flag etiquette. The scouts enjoy holding their meetings in various locations, such as their Christmas party at Mallwitzs Island Lanes in December and Lasertron in January. While the scouts enjoy these activities, they are also hard at work on merit badges, community service and advancements.
For more than a century, Boy Scout programs have instilled in youth the values and knowledge that they need to become leaders in their community and in our country. If you have a son age 10 ½ years or more, in at least 5th grade, we would like to invite him, along with a parent or guardian to visit Troop 510. Youll get a firsthand look at some of the troop activities while meeting with scouts and leaders. For more information, please call Susan Grenda, Assistant Scoutmaster at 773-0103 or visit the troop website at www.gi510scouts.com . 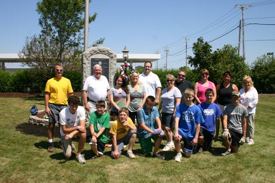 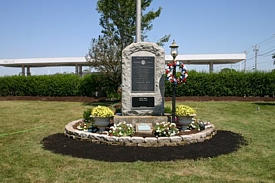 
The monument is dedicated to Charles N DeGlopper, and several other heroes from Grand Island, who each made the ultimate sacrifice while serving our country in foreign wars. Next year is the 50th Anniversary of the monument, which is the center of Memorial Day observances for the Island.
Tim Winder of Troop 510 worked with Linda Tufillaro and Ann Dyet of the Grand Island Parks & Recreation Dept. to develop new design drafts for the landscaping that surrounds the monument and to organize the landscaping project. After consulting with Commander Alan Lee Sr. of the VFW Post #9249, a circular block wall design was selected to surround the memorial stone and flower bed. Unlike the old landscaping, this new design enables our veterans to present their wreath to the front of the monument, and allows visitors to touch the memorial plaque, without having to climb over the block wall into the flower bed. The new wall and flower bed also includes the flagpole which will simplify maintenance of the lawn area, for the Parks & Recreation Dept.
The boy scouts and families of Troop 510 disassembled the old block wall, power washed the landscaping blocks, laid a compacted gravel foundation, rebuilt the wall to the new design, filled the bed with soil, replanted the bed, and re-seeded the grass area in front of the monument. Following a re-use and recycle philosophy, all previously existing materials were re-used, including the landscaping blocks, the paving stones, and the plants. To complete the new design, some new blocks, soil, mulch, and plants were added.
Following completion of the work, Town Supervisor Peter McMahon thanked the Troop and treated everyone to ice cream at Adrians. Further improvements to the Park are planned for the special 50th Anniversary Commemorations on Memorial Day of 2012. 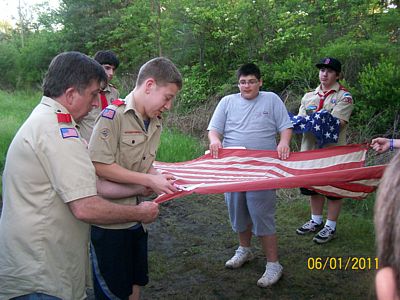 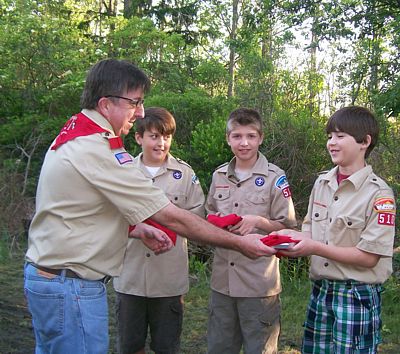 Boy Scout Troop 510 welcomed three graduating Webelos into the troop on Wednesday, June 1, 2011. The Crossing Over Ceremony was held at the bonfire pit at Trinity United Methodist Church, the troop's sponsoring organization. The rain held off long enough for Scoutmaster Pat Garten to welcome each boy with the red Troop 510 logo neckerchiefs after a brief ceremony. The scouts also participated in a Flag Burning Ceremony, a first for many of the scouts and leaders in attendance. Afterwards, the scouts along with their families enjoyed cooking some spider dogs and SMores on the bonfire. Newest scouts are enjoying their experiences in Scouting and will be attending summer camp in July at Camp Merz.
Boy Scout Troop 510 welcomes new members anytime. Calling all boys age 10 and updo you like high adventure activities such as camping, swimming, canoeing, rock climbing or sledding in the winter? We do all of these fun activities over the summer and throughout the year.
Scouting has a reputation for helping youth develop self-reliance, strong character, respect for others, good citizenship skills, along with physical and mental fitness. For more than a century, boy scouting has instilled in youth the values and knowledge they need to become leaders in their community and in our county. Check out the Troop 510 website at: www.gi510scouts.com or call Susan Grenda, Asst. Scoutmaster at 773-0103 for more information. 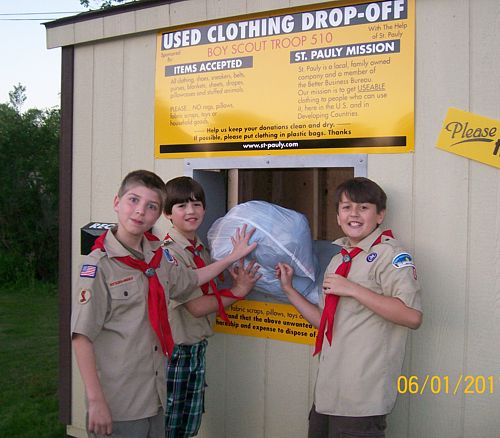 Have you been spring cleaning? Garage Sale clothing left over? Dont quite know what to do with those gently used, outgrown, clothes? There is now a Used Clothing Drop-Off Shed in the parking lot of Trinity United Methodist Church on Whitehaven Road. Boy Scout Troop 510 and St. Pauly Mission have partnered together in this ongoing fundraiser. This is a win-win for everyone involved! Now, you have a convenient location to drop off clothes; quite possibly the only site on Grand Island. Boy Scout Troop 510 is reimbursed by the pound for these donations. The clothing is picked up by St. Pauly Mission and will be given to people who can use it here in the U.S. and in Developing Countries. The shed is maintained by each scout family with two-week rotating assignments. Since its placement at Trinity in May, the Troop has been overwhelmed by the generous donations received. Boy Scout Troop 510 would like to thank the community for their support of this fundraiser. Items accepted are: All clothing, shoes, belts, purses, blankets, sheets, drapes & stuffed animals. Please, no rags, pillows, fabric scraps, toys or household goods. Receipts for your donation are available at the shed. 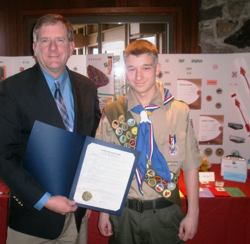 Eagle Scout is an achievement obtained by only the most dedicated and hardworking of Boy Scouts. Recognizing the significance of this rank, Erie County Legislator Kevin Hardwick presented a proclamation to Jonathan Grenda, a member of Troop No. 510, who achieved the outstanding rank of Eagle Scout. The presentation was made Sunday, March 13 at Trinity United Methodist Church during the Eagle Court of Honor Ceremony.
Jonathan is a terrific young man and his efforts must be applauded. He has been a Scout since first grade and his dedication to service is apparent through his 32 merit badges and outstanding Eagle Scout project, Legislator Kevin Hardwick said. Congratulations to him on this wonderful achievement.
Grendas Eagle Scout Project was the creation of 50 first aid kits. All of the materials for the kits were donated by local and national companies. Materials included bandages, tape, ointments and medications like Motrin, Tylenol and Benadryl. The containers themselves were donated as well. The materials were assembled into kits by Grendas fellow scouts. The completed kits were donated to the Neighbors Foundation of Grand Island Inc. and then given to local needy families on Grand Island during the Share the Happiness Drive.
A junior at Grand Island High School, Grendas plans for college include studying in the medical or health field. He is the son of Gregg and Susan Grenda. He has also earned the Brotherhood and Ordeal Member of the National Order of the Arrow. He has served Troop 510 as Patrol Leader and Quartermaster. Legislator Hardwick presented the proclamation on behalf of the Erie County Legislature which recognized Grendas achievements during the Feb. 3, 2011 session. 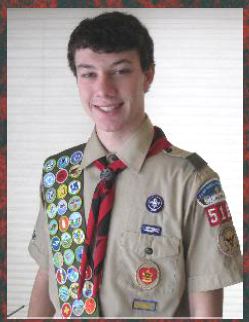 Chris Brownschidle, Grand Island's newest recipient of the Eagle Scout rank, is a junior at Grand Island High School. In all, Chris has completed approximately 325 rank requirements and earned 31 merit badges. He has become a young man who is qualified to take care of others as well as himself. Chris Eagle Badge is not a decoration, but rather a symbol of knowledge and ability. The final requirement for becoming an Eagle Scout is to complete the Eagle Scout Service Project. The Eagle Scout Service project requires the scout to be a leader. He must plan, develop and provide leadership to others in a service project of real value benefiting the environment, his community, religious group, school or other worthy group. Chris chose to utilize his artistic abilities in the implementation of his project.
Chris Eagle Service Project was to design and coordinate the creation of a Historic Grand Island Mural, installed on a wall in the Grand Island Town Clerks office. In order to accomplish this, Chris researched Grand Island history and gathered historical photos and data, met with members of the town board and the Grand Island Historic Society, conducted fund-raising activities and solicited donations from local businesses. He organized and supervised work details of friends and family volunteers, adults and young people, to paint the mural and install the framed photographs and information.
Chris Historic Grand Island Mural is an educational asset to the residents of Grand Island and will be available for viewing during our reception after the ceremony.
Chris, the son of Lee Brownschidle and Donna Finney, was recognized on Friday, February 11, 2011 at Town Hall. 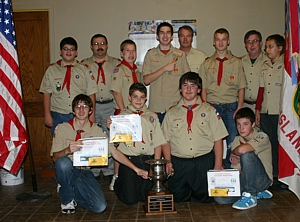 
The Greater Niagara Frontier Boy Scout Council held its Fall Camporee at Goat Island October 15-17. With record-breaking attendance, over 900 Boy Scouts and adult leaders camped out on Goat Island, within earshot of the thundering Niagara Falls.
The setting for this event was ideal, with fall colors and a picture perfect blue sky on Saturday. Patrols from 66 different troops competed in traditional Boy Scout events including orienteering and stump skittles. Borrowing from Goat Islands historic heritage, there were also challenges requiring a knowledge of electricity, and demonstrating an understanding of magnetism. By far the most popular event was a game known as rat-pucking (in which no live animals were harmed). Competitors pucked their rats round a multi-holed course, yelling Cheese before pucking their rat through the air towards its hole.
Four boys from Grand Island Troop 510 Scorpion Patrol attended the event, and took part in the challenges. Chris Stawiasz, Jake Matwijkow, Ryan Held, and Tim Winder put in an excellent overall performance - taking first place in 2 events, and clinching the Trophy as Overall Camporee Champions.
Afterwards, Assistant Scoutmaster Mike Stawiasz was so overwhelmed with the boys achievement that he let out the secret to their success. We were all just having fun with the challenges, we didnt even know that there was a trophy to be won!".
Join The Champions - Troop 510 is currently recruiting new members (no previous experience in Cub Scouts or Boy Scouts is necessary). If you, or a boy that you know, would like to find out more about Rat Pucking, or are interested in visiting Troop 510, please visit the troop website at www.GI510Scouts.com or contact Sue Grenda via e-mail Troop@gi510scouts.com or phone 716.773.0103. 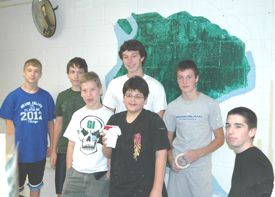 
Chris Brownschidle has been working on a mural for the town at the Town Clerk's office in Town Hall as part of his quest to be an Eagle Scout. Chris is 16 years old and belongs to Scout Troop #510 which is based at Trinity U.M.C. The mural of the island when finished will have historic island photos displayed with it. Chris was assisted by many of his fellow scouts from Troop #510. 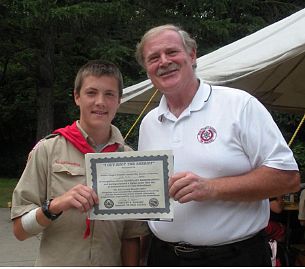 Erie County Sheriff Tim Howard visited Boy Scout Summer Camp at Schoellkopf Scout Reservation, Cowlesville, NY, last week. He met with the Boy Scouts from New York and New Jersey who were taking their Rifle Shooting merit badge, and impressed upon the boys and their leaders the critical importance of gun safety.
The eagle-eyed Sheriff then challenged the boys to match him or beat him in a target shooting competition with .22 bolt-action rifles. Tim Winder of Grand Island Troop 510 shot a perfect score of 50, matching the Sheriff's superb sniping. Boy Scout Tim was duly presented with a signed 'I Outshot the Sheriff Certificate' by Erie County Sheriff Howard.


esearch and the manufacture of signs for each species, including species, descriptions and pictures. The final step was to install the signs along path. The project was conducted in the fall of 2001.