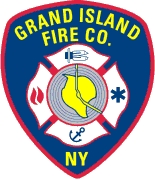 Firefighters Day at The Miracle League of WNY - August 2021

From Ron Stipp - Public Information Officer
On Sunday, August 29th, The Miracle League of WNY hosted âFirefighter Dayâ at Veterans Park on Grand Island. Although the rain came and cooled things off a few minutes before the first pitch, things heated right back up and it turned out to be a great day for the kids!
The Miracle League of WNY is an organization that is designed to serve individuals who cannot be accommodated by established baseball leagues due to their special needs of their disabilities. What started out as a dream for residents of Grand Island quickly turned into reality with a tremendous amount of support from the community. More information can be found at miracleleaguewny.org.
Several volunteer members from Grand Island Fire, River Road Volunteer Fire Company, Bergholz Volunteer Fire Department, Brighton Volunteer Fire Company, and Kenilworth Volunteer Fire Company accompanied and assisted the kids while at bat, running the bases, along with pitching and fielding.
After a few short hours of fun and games, and a group photo in front of the fire trucks, followed what we believe is probably the best part of the event on a hot day (and even for us adults too) ...cooling down from the cold water from a fire truck hose! With the help of the aerial Grand Island Truck #6 extended over the field, the super-soaker was activated from above!
We have a saying around GI Fire that âitâs for the kidsâ ...and for sure, that Sunday was a great day for the kids!

From Ron Stipp - Public Information Officer
This weekend, the members of the Grand Island Fire Company said their final goodbyes to two iconic life members of the GIFC.
Luigi DâOrazio, 91 passed April 1, 2020. Lou was born December 19, 1928 in Rochester, NY. He proudly served in the United States Air Force in the Aleutian Islands during the Korean War. Prior to his retirement in 1988 after a 35-year career at New York Telephone, he joined the volunteer ranks of the GIFC in 1964. He quickly received his Advanced EMT certification and was as we would call a âdie-hard responderâ for years!
Fast forward to 1984, Lou was awarded his life membership...but he still remained an active volunteer. Around the hall, Lou was always known for wearing his linesman boots...no matter the weather. Lou received the Grand Island Chamber of Commerceâs Special award for his lifetime of work as a community volunteer in 1991. Due to the pandemic, a memorial service was held this past Saturday, and said our final goodbye to this life member of 56-years.
Raymond W. Pauley Sr, 88 entered into rest August 17, 2021. Ray joined the volunteer GIFC service in 1963. Ray was known as an icon not only at the hall, but in the community. You could always find Ray promoting Fire Prevention at the annual Lions Day Kids Picnic, rain or shine.
Throughout his time at the GIFC, he served in the Chiefs line for several years. Ray retired from NY State as a Sr. Parole Officer. He is most remembered for Press Releases to local media outlets based on incidents the GIFC encountered. Although Ray loved antiquing, he always found time to remain a âdie-hard responderâ for years! This 58-year life member will be missed.
Rest in peace our brothers; we have it from here.

Please call the GI Fire Companies non-emergency phone # to report that you are having a bonfire. Several times in the past week, they have been sent out because of smoke reported in an area with an unknown source. It's great to have a fire but they ask that you call when you start one and after its out. This will avoid a report of a smoke and not add any problems with responding when there are real emergencies they need to go to. Call 773-4334. 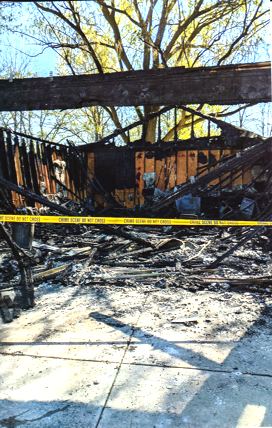 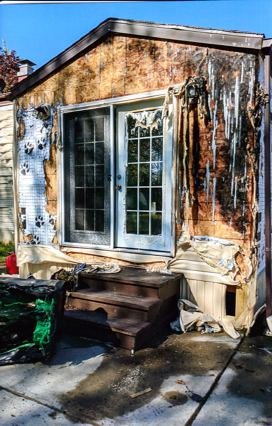 At 5:39 a.m. on Monday, May 17th, Grand Island firefighters responded to a Tracey Lane structure fire. The resident advised the GI Fire Company that the fire originated in an unattached two car garage. Fire Chief Mark Sadkowski stated that the garage was fully involved when Engines #2, #5, LT6 and fire suppression crews arrived on location. The bulk of the fire was knocked down and overhaul commenced at 6:06 a.m. Mutual Aid assistance was received from the Sheridan Park VFD and City of Tonawanda Fire Department. Damage was estimated at $30,000 to the garage, $10,000 to the contents, $10,000 to the exposed residence and $10,000 to the exposed building next door. Although the origin was confirmed to be within the garage itself, the exact cause remains under investigation according to Chief Sadkowski. All participating units returned in servicce by 7:19 a.m. 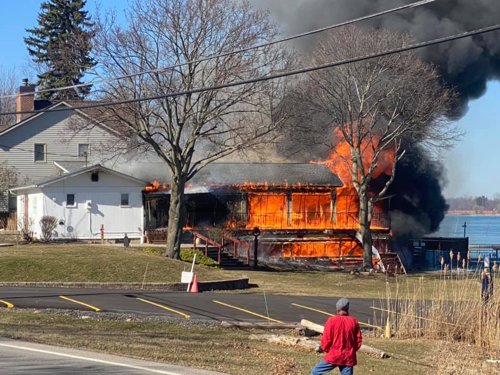 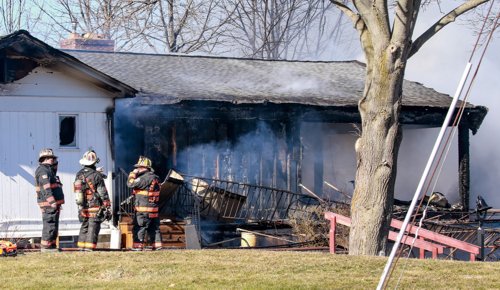 At 3:35 p.m. on Saturday, March 20th, Grand Island firefighters responded to a structure fire at the Niagara Sailing Club on East River Rd. Fire Chief Mark Sadkowski reported that Engines #3, 4, 5, Ladder Truck 6, and fire suppression crews encountered heavy smoke and flames engulfing the building upon their arrival on location. Mutual Aid assistance was received from Sheridan Park Fire Company, Kenmore Volunteer Fire Department and City of Tonawanda Fire Department. The fire was brought under control at 4:31 p.m. Total damage was estimated at $200,000 to the structure and $100,000 to the contents. A neighbors shed also sustained $5,000 fire damage. The exact cause remains under investigation. There were no injuries reported. All participating units returned in-service by 6:23 p.m. except for one crew remaining on-scene to assist Erie County Sheriff Department fire investigator. 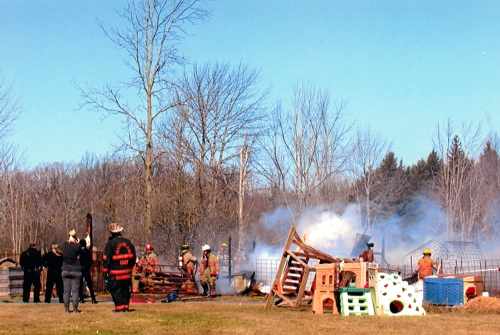 Story by Ray Pauley, Public Information Officer.
At 10:23 a.m. on Friday, March 12th, Grand Island firefighters responded to a barn fire in the 2900 block of Staley Road. Ass't Fire Chief John Podlucky reported that the building was fully involved when engines #2,3,4,5 and fire suppression crews arrived on location. Mutual aid assistance was received from the Sheridan Park VFD and City of Tonawanda Fire Department, and the fire was brought under control at 10:58 a.m.
Damage was estimated at $75,000 to the structure and $50,000 to the contents which included a considerable loss of livestock trapped inside. The exact cause remains undertermined according to Ass't Chief Podlucky. There were no injuries reported and all units were back in service by 12:30 p.m. . 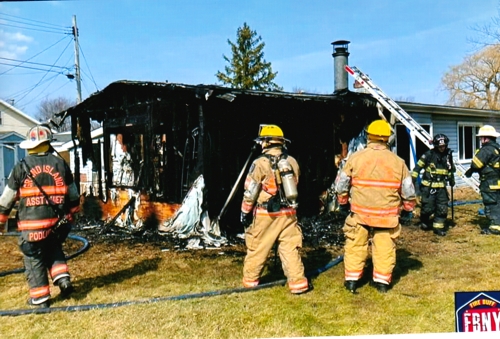 Story by Ray Pauley, Public Information Officer.
At 11:37 a.m. on Monday, March 8th, Grand Island firefighters responded to a structure fire at a Woodlee Lane home. Meanwhile, all occupants were able to safely exit the burning interior, prior to their arrival.
Fire Chief Mark Sadkowski reports that firefighters encountered heavy smoke venting from the building when they arrived on location with engines #2, 5 and LT6. Mutual aid assistance was received from Brighton VFD, Sheridan Park VFD, River Road VFD, Kenmore VFD and the City of Tonawanda Fire Department. The fire was brought under control at 12:10 p.m.
Damage was estimated at $100,000 to the structure and $75,000 to the contents. Cause remains undetermined according to Fire Investigator Mike DeMartin of Grand Island. There were no injuries reported. All participating units returned to service by 1:46 p.m.

Story by Ray Pauley, Public Information Officer.
Grand Island Fire Chief Mark Sadkowski urges residents and business owners to "adopt" a nearby fire hydrant to keep them clear of heavy snow accumulations. He stressed that during fire emergencies, firefighters should not have to locate and dig out hidden hydrants, to gain a ready water supply for on scene apparatus. Any time taken away from actual firefighting operations could prove to be costly in terms of property damage or rescue efforts. Such delays can be avoided with help from the community. Your GIFC volunteers will appreciate such valuable assistance.

Story by Ray Pauley, Public Information Officer.
Grand Island Fire Chief Mark Sadkowski reports a steady increase in CO incidents over the past two months. Firefightwrs responded to four such calls during Decembewr 2020, which then doubled to eight during January 2021.
Chief Sadkowski stated that most of these calls involved faulty detectors, however, in one instance a reading of 10 PPM was caused by a water heater venting problem and the homeowner was advised to take corrective action.
Fire officials note that CO poisoning closely mimics the flu with headaches, nausea, etc. CO itself is difficult to detect because it is colorless, odorless, tasteless and is the result of incomplets combustion. Any sustained levels of 150-200 PPM can be fatal to anyone exposed. It is therefor crucial that gas fired appliances and other sources such as furnaces, stoves, wood burning stoves and fireplaces, hot wat heatwes, boilers, etc., be checked by qualified technicians on a regular basis.. Such a precaution, along with fully operational CO detectors, will help to prevent life threatening consequences by this "silent killer."